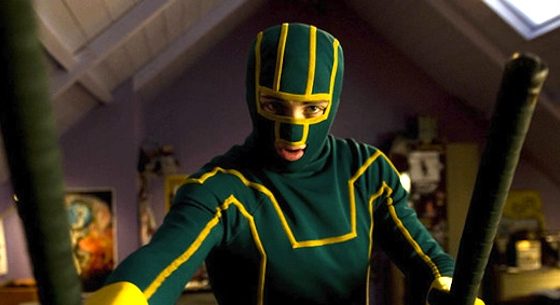 It was pretty much established by the film’s title that Kick-Ass was not going be your average super hero movie flick. The film is based on the 2008 comic series of the same name written by Mark Millar and illustrated by Marvel comics icon, John Romita Jr.

The premise of the film, focuses around the question, “Do you believe in super heroes?” For those who may question the existence of whether or not good people exist, the movie, Kick-Ass, may change your views to believe that some people out there are actually trying to change the world for the better.

Upon creating his alter ego, Dave is thrust into a dangerous world that is extremely different from his comic book inspired imaginings. While “fighting” crime (more like getting his a** kicked on a regular basis), Dave encounters two other super heroes; Big Daddy (played by Nicolas Cage) and Hit-Girl (played by Chloe Grace Moretz). The two become his mentors and teach him the tricks of the trade.

If you are still some of the few people who haven’t seen this film, I strongly recommend that you make it a top priority to see it before it’s gone! Kick-Ass offers a completely different formula of action entertainment that some might enjoy while others may find it unsettling.

An example of this is the character Hit-Girl, played by 13-year old actor Chloe Grace Moretz. Hit-Girl (aka Mindy Macready), curses like a sailor and kills bad guys with the finesse of a well-trained assassin.

Kick-Ass has several things going for it. The directing, cinematography, script, and editing are beyond exceptional. For instance, there are some scenes where the viewer will feel as though they are playing a video game—that was something I found to be extremely different when compared to other action films that I’ve watched.

Whether you’re a fan of the comic series or simply enjoy action films, Kick-Ass delivers the goods!