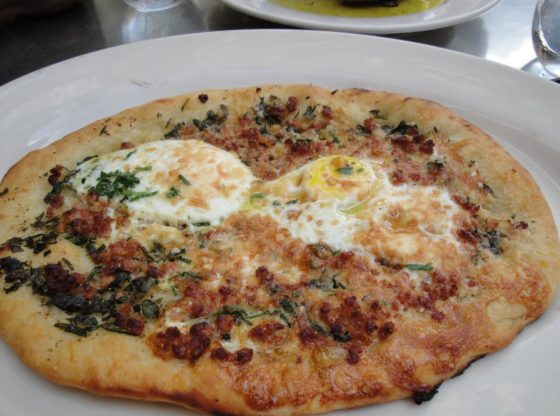 There are few things greater in life than a good meal at a restaurant. Yet one of the greatest things is finding good meals that are cheaper than expected.

Inside a garage located in the West Village is one of the greatest restaurants in New York City. The restaurant, Barbuto resides on 775 Washington Street. Celebrity chef Jonathan Waxman owns Barbuto.

Many know Waxman from his stints as guest judge on Top Chef and participant on Top Chef Masters. Waxman is known for his use of local and organic foods. Celebrities such as Jason Sudeikis and Olivia Wilde are known to frequent the restaurant.

But why is Barbuto so good?

Waxman’s Pollo Al Forno has been featured widely. The Pollo Al Forno dish has even been on the Food Network show Best Thing I Ever Ate. Fellow celebrity chef Tyler Florence spoke about Waxman’s dish as the greatest chicken dish he ever tried.

I was able to visit Barbuto on Sunday afternoon for brunch. With a reservation, my party was seated right away.

The restaurant itself is airy and spacious. The ambiance is warm and inviting. It’s probably the opposite of what many think would constitute a swanky Manhattan restaurant. Plus, the food does not disappoint.

The first course was insalata stagionale. The citrus salad included cara cara oranges, grapefruit, onions, chilies and olives. The dish was served with vinaigrette dressing. The sweet cara cara oranges paired with tart grapefruit was delicious. The salad was refreshing and a great start to the meal.

The second course shared for the table was a pizza uovo. The pizza uovo consists of oven baked eggs, salsa verde and pancetta. I never thought I would say this but this was the best pizza I have ever had in a long time.

The oven baked eggs allowed the egg yolks to break over the salsa verde and pancetta; when it was paired with the bread, it was delicious. The creaminess of the egg yolks with the salty pancetta worked beautifully.

SFC junior Lauren Suarez commented, “I usually hate pizza but I could eat this forever.”

Next, came the famous pollo al forno. The chicken is served just as a plate. Side dishes must be ordered separately.
The pollo al forno is plated with the roasted quartered chicken placed in the center while the salsa verde tops it. This was the best chicken I ever ate.

The chicken skin is spiced and butter is added to allow a delicious crispiness for the roasted chicken. The chicken itself is something that everyone should experience.

I have never had a chicken dish from a restaurant that was not overcooked or too done. The pollo al forno was roasted to perfection. It was moist and juicy. Tyler Florence did not lie about how good it was.

“Is this what heaven tastes like?” Suarez said about pollo al forno.

Lastly, our table had dessert. One dessert was a Kahula cake. The dessert was a vanilla cake doused in Kahula liqueur and topped with whipped cream, chocolate and hazelnuts. This was everything a dessert should be. Not overtly sweet, a good balance of flavors, and the Kahula did not overpower the cake.

The other dessert was a vanilla bread pudding that came with fresh berries. This bread pudding was not soggy; it was a wonderful dessert

A bill that included two main courses, one salad, one pizza, two different desserts, and two coffees totaled just over one hundred dollars. It was amazing that the bill was so low for a meal like that.

The wait staff is busy in this popular restaurant but they do check on you often. It was mentioned in passing that my birthday was coming up, and the waiter actually had a lit candle in one of the desserts. I think this shows how courteous the wait staff is since no one asked him to do so.

I have never had a meal like that before. Plus, I have already decided that because of Barbuto, no other chicken dish will compare to the pollo al forno.

Everyone should experience a good New York City meal like this. It’s a train ride away and is more than worth it. With these prices, you cannot go wrong.

THE TROUPERS GO R-RATED
ONE GIANT STEP FOR WOMEN