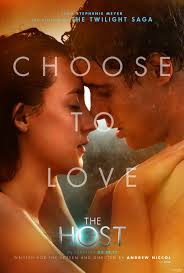 hostThis movie appears to take place in the near future where Earth is invaded by aliens who have spent thousands of years living in other universes. The plot of this film revolves around Melanie Stryder, played by Saoirse Ronan, who gets cornered by a group of Seekers, which are already invaded humans who are hunting for those remaining. Rather than being taken in by these seekers, Melanie jumps to what she hopes is her death.

The only thing is, she is still alive and is injected with an alien force by the name of Wanderer. From the moment that Wanderer is put inside her, Melanie fights to stay alive and preserve herself because she feels that her memories may lead the aliens to the resistance, where her little brother and boyfriend, Jared, played by Max Irons, are living. Wanderer gains information about Melanie through a series of dreams and finds that she is starting to feel how Melanie feels about Jared as well.

Fearing that they are both going to put themselves and Melanie’s family in danger, Wanderer and Melanie escape, even though the escape was a little flawed. Melanie and Wanderer escape and they are reunited with the resistance group. As time goes on, Wanderer starts to fall in love with one of the people in the resistance.

So here we have an alien invasion, a body with two souls, two love interests and one love triangle.

This love triangle starts to become a little messy as time goes on because there is an inner monologue going on during kissing, many punch/kiss combos, humans falling in love with aliens and vice versa, along with one painful “I love you” speech. The inner monologue does get a little annoying at times but it was necessary to understand the concept of Melanie still being alive inside of Wanderer.

In comparison to the novel, I thought that this novel to film adaptation was pretty good. In the novel, Meyer explained what was happening very well by using in-depth descriptions when talking about the scenery; inside of the residence and out.

Meyer said in an interview that she was concerned with how this novel would be adapted into film. However, even though there were many flaws, you can see how talented Saoirse Ronan is as an actress and how Niccol did what he could with the material that was given to him.

If you are a fanatic of the Twilight saga and sappy love stories, The Host is a must see.

REVIEW: OLD CUDI IS BACK
REVIEW: A TASTE OF TANOREEN