REVENGE IS SWEET THE SECOND TIME AROUND

Home /Sports/REVENGE IS SWEET THE SECOND TIME AROUND 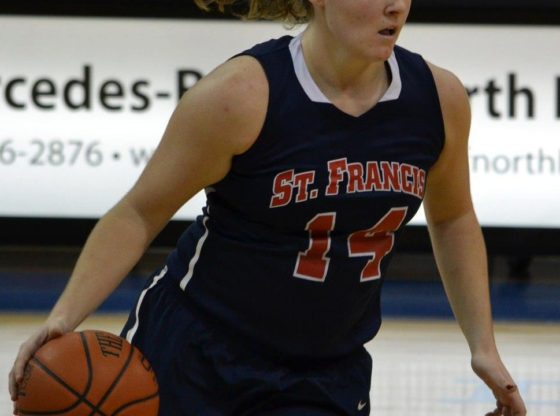 Women’s Basketball: The Terriers Women’s basketball team picks up their biggest win of the season knocking off top ranked Robert Morris 93-82 in overtime.

In a significant matchup towards the latter stages of the regular season, an early test for our faithful and a game worthy of making a statement, the home team prevailed.

If you weren’t in attendance at the Pope physical Education Center of St. Francis College, you missed a great production.

The St. Francis College Women’s basketball team, has claimed victory against the Robert Morris University Colonials 93-82 in overtime, a preview of what’s to come as the calendar progresses to the month of March.

The tale of the tape lies within the stats accumulated by both teams.

To win close games, the opportunity of sinking free throws when given is essential and tonight RMU missed a couple that spelled their fate towards the end of the overtime period.

With the score 75 all in the overtime period, Junior guard Katie Fox honored her 43.1% from three-point range, a team best converting one from Twinsburg, Ohio, her home which broke the dry spell as the Terriers took the initial lead 78-75.

RMU Senior forward Artemis Spanou a familiar foe, who torched the Terriers for 39 points in the previous contest, leading her team to a 101-95 victory, feasted down low all night having her way with the Terriers low-post defense.

On this particular possession, she displayed her offensive variety and buried a three, tying the game at 78, on her way to a team high, 37 points.

The Terriers responded with a layup by Junior guard Eilidh Simpson, breaking yet another tie, a re-occurring theme throughout the game, now leading 80-78, with 3:26 remaining in overtime.

Enter the Violins as RMU cemented their fate, which influenced the winner’s circle. Fouls by Fox, Junior forwards Sarah Benedetti and Jaymee Veney provided six free throws for Spanou and Senior forward Kelly Hartwell, who both combined to hit only one of six free-throws missing five straight over a crucial two minute stretch.

With the game still in the balance and a gift of 5 missed free-throws the Terriers did not disappoint and took the advantage closing out in style. Veney gave the Terriers a four-point lead with a short jumper, 82-78, which was reduced to a three point lead, 82-79, as Hartwell connected on one of two free-throw attempts.

Immediately following the made free-throw, Simpson connects on a three giving the Terriers a six point lead, 85-79 with 2:09 remaining in overtime.

A defensive stop and a foul later features Simpson on the line converting both of her free-throw attempts enhancing the Terriers lead to eight, 87-79 with 1:43 remaining. Game. Set. Match.

Simpson scored 27 points for the Terriers and Veney chipped in with 17 points, but the star of the game was without a doubt Benedetti scoring a team high 28 points.

To begin the second half, Benedetti connected five straight threes scoring 24 points in the second half alone, which included a beautiful behind the back layup to put the Terrier ahead with 1:01 remaining till the end of regulation.

Assisting Spanou for RMU was Freshman guard Anna Stamolamprou with 17 points and Hartwell with 17.

In a game that they needed to add to their collection of wins, the Terriers answered the bell against a team that they might very well see in the NEC Tournament.

The Terriers are now 18-9 overall for the season, 9-7 in conference play, owning a two-game winning streak heading into their last two matches hosting Bryant University on March 1st at 2 pm and LIU-Brooklyn on March 3rd, at 7 pm.

PREVIEW: TERRIERS GET SET TO GO AGAINST BRYANT UNIVERSITY ON ESPN 3
AMDY FALL DOES IT ALL: SFC BEATS BRYANT 62-59