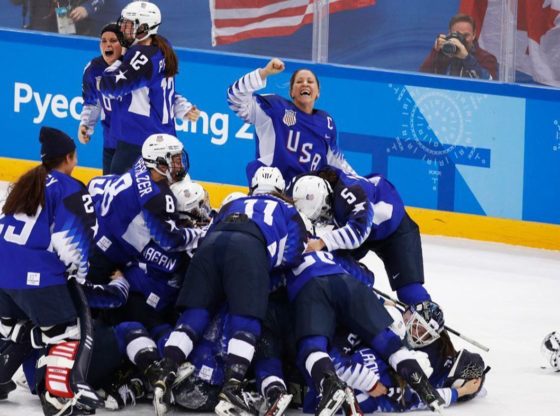 The Gold Medal Game of the 2018 Winter Olympics between the United States and Canadian Women Hockey Teams began at 11:10pm in South Korea’s Gangneung Hockey Centre.

Canada got the first shot on goal four minutes into the game, but U.S. goalie Maddie Rooney stopped the wraparound attempt.

After a near-scoreless first period, Hilary Knight scored her second goal of the tournament by tipping in Sidney Morin’s wrist shot for a U.S. Power Play goal. As a result, the U.S. led Canada 1-0 with 25 seconds left on the clock in the first.

However, two minutes into the second period, Canada’s Haley Irwin deflected a centering pass by Blayre Turnbull to tie the game.

Nearly 5 minutes after, Marie-Philip Poulin scored on a wrist shot to give the Canadians a 2-1 lead.

In the third period, the U.S. trailed the Canadians 2-1 for over 15 minutes and it looked as if Canada would clinch their fifth consecutive Olympic Gold Medal.

However, with a little over 6 minutes left in the third period, Monique Lamoureux-Morando converted a nifty Kelly Pannek shot into a breakaway and tied the game at 2-2.

No shots were allowed in the final minutes of regulation, forcing a 20-minute Overtime period to commence.

Despite an early American post shot and a late Canadian Power Play opportunity, no goals were scored in the entire 20-minute Overtime period.

Brilliant goaltending by both the Canadian goalie Shannon Szabados and the U.S. goalie Maddie Rooney contributed to the scoreless extra period. Thus, a shootout would decide the game.

At the beginning of Round Two immediately afterwards, Meghan Agosta scored a goal for Canada and their goalie Szabados denied a Hannah Brandt opportunity to knot the shootout tallies at 1-1.

After a scoreless Round Three, Amanda Kessel scored a U.S. goal and Mélodie Daoust scored one for Canada In Round Four to knot the shootout score at 2-2.

In Round 6, U.S. player Jocelyne Lamoureux-Davidson (sister of third period game-tying goal-scorer Monique Lamoureux-Davidson) scored a beautiful goal past Canadian goalie Szabados to give a 1-0 advantage to the Americans. Right after, U.S. goalie Maddie Rooney brilliantly stopped another Meghan Agosta attempt and the Americans won the instant classic.

The United States Women’s Olympic Hockey Team had its inaugural season in the 1998 Nagano Olympics and won Gold.

Every Olympic since, Canada’s Olympic Women Hockey Team has won. In the process of doing so, Canada beat the U.S. Hockey team in the Olympic Gold Matches in; Salt Lake City in 2002, Turin in 2006, Vancouver in 2010, and in especially heartbreaking fashion at Sochi in 2014.

However, on what was the 38th anniversary of the Men’s Olympic Hockey Team defeating the heavily-favored Soviet Union Hockey Team during the height of the Cold War in 1980’s Miracle on Ice at the Lake Placid Winter Olympics, the story again favored an American Hockey Team.

U.S. captain Meghan Duggan opened these 2018 Olympic Hockey Games by saying, “This is the team,” implying that this team could win it all. And win it all they did.

“I knew we were going to proudly wave this flag,” the 28-year old Jocelyne Lamoureux-Davidson said. She continued, “there was just no doubt in our team and what we can accomplish.”

U.S. head coach Robb Stauber said “this is probably a classic example of how hard it should be to win a gold medal.”

U.S. goalie Maddie Rooney (at only 20 years of age) had one of the match’s greatest performances. Rooney’s teammate Knight described the goalie as having conducted “a gold medal-winning performance.”

According to official tallies by The Washington Post, Rooney made 29 saves through overtime and additionally turned away four Canadian shots in the six-round shootout. “Pressure is power” the goalie would simply say.

In the words of Al Michaels: Do you believe in miracles?