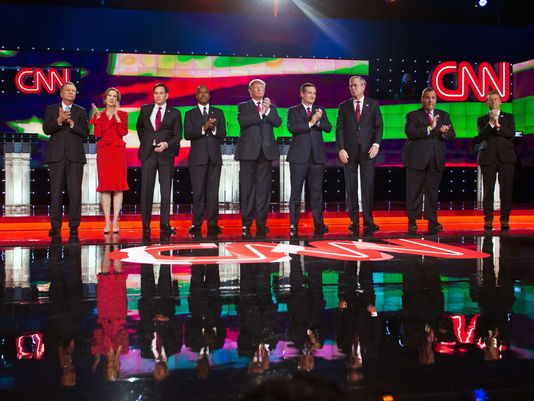 The last republican debate before the election year was held last night in Las Vegas, Nevada, where the candidates discussed issues such as terrorism and immigration.

Going into the debate Donald Trump was leading in almost every poll, with a large gap between him and runners up Ted Cruz and Marco Rubio.

The main issues of the American people have shifted to national security and terrorism, which the candidates heavily got into. In the first hour Rubio and Cruz went head to head over the different bills each supported about defense spending and national security, while Trump kept quiet.

However Trump and Jeb Bush got into immigration issues quickly, specifically on Trump’s comments about not allowing any Muslims into the country. Bush did take him head on and explained that America needs to work with the Muslim community to help fight ISIS.

“You’re not going to insult your way to the presidency,” Bush told Trump.

But Trump was quick to remind Bush of his standings in the polls. While Trump also officially declared that he would support the republican nominee, whoever it may be.

After the debate, Bush was considered a player in the game once again after showing some aggression and energy, backing up his plan to fight ISIS, which is to hit them harder. Along with Bush, Chris Christie was also praised, as he reminded the American people that he has protected New Jersey from terrorist attacks, after he has been hit heavily with threats since 9/11.

“If your eyes are glazed over, this is what it’s like to be in the U.S. Senate,” Christie said about Cruz and Rubio.

Senators Cruz, Rubio, and Rand Paul, made it somewhat difficult to follow if anyone was unfamiliar to the issues, which worked in Christie’s favor.

Rand Paul then questioned Trump, by asking him if he is willing to change the constitution so that refugees and immigrants are not allowed into this country, but Paul did not have a good enough night to put him in the top five after all was said and done.

Dr. Ben Carson had a slow start, but then when asked if he is okay with bombing civilian areas and killing innocent people to defeat ISIS, he said he would be willing to and compared it to brain surgery on a child. He also said that we should not move refugees. After his meeting in Jordan last ‘week with many, he said that we should set up safe areas with Kurdish forces protecting them.

Carly Fiorina was quiet on that issue, but when questioned on her previous remarks about Vladimir Putin and Russia, she said she wants to stay silent and build up the military. However, she added more to the conversation about the USA Freedom Act that just got voted into law.

Fiorina wants Silicon Valley and the private sector to look into personal emails, Facebook messages, phone calls and so on, to protect the American people from more terrorist attacks. She was all about showing her toughness and took jabs at Trump for just “talking tough.”

Fiorina also disagreed with Trump when he originally said he wanted to close down the Internet to stop ISIS, which Bush compared to China and North Korea’s policies.

John Kasich tried his hardest to calm down the rest of the candidates at times to refocus the debate and make it friendlier for people to follow.

Although Kasich spoke the least, in some polls he has gained some steam from his comments on the meetings in Paris about climate change.

“Over in Paris, they should have been talking about destroying ISIS,” Kasich said.

In the polls released just hours after the debate, many still had Trump in the lead and Cruz trailing, but not by much. Cruz took the lead in a poll taken in North Carolina.

Cruz did show that he had a plan to set up an Arab coalition to fight ISIS, which 65 percent of people believe is the best way to fight the terrorist group, according to an unofficial Facebook poll by CNN.

Throughout the debate a common ground among all candidates was that President Barack Obama and former Secretary of State Hillary Clinton would not be able to efficiently defeat ISIS and continue to protect America.

“Feckless weakling” was what Christie called Obama. Meanwhile, Paul pointed to Christie and said, “If you want World War III here’s your guy.”

The Iowa poll will be released in a month and a half.