REAGAN, REPUBLICANS, AND THE RIGHT

Home /News/REAGAN, REPUBLICANS, AND THE RIGHT 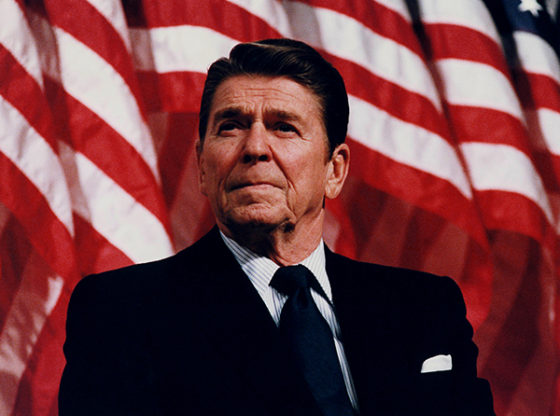 Fourteen. The number of times Ronald Reagan was referenced in the first GOP debate for the 2016 primaries. 23 times during the second- but the GOP today is a vastly different party from that of the president who modern Republicans so revere.

The GOP, or “Grand Old Party” was formed in 1854 by a group of abolitionists looking to stem the tide of slavery. They rapidly gained support and by 1855, the party held a majority in the House of Representatives. Some of the original party platforms then ring true with the party today- defending state’s rights over a large federal government- but demographics could not be more different. Today’s Republican party finds its support in the South and Midwest, especially in rural areas, while the Northeast is considered a Democratic stronghold. Minority voters have voted overwhelmingly for Democrats in recent elections. During the 19th century this was completely different, with northern industrialists generally voting Republican and Southern white farmers voting Democratic.

The party didn’t have to worry about traditional voting patterns in the 1981 election- Ronald Reagan won by a landslide, winning the electoral votes of 44 states, and beating Jimmy Carter in the popular vote by nearly 10 percentage points. But just years earlier, Reagan may have seemed an unlikely candidate for the Republican presidency.

Ronald Reagan was a member of a union, respected FDR’s liberal policies, and was a registered Democrat until his 50s. All of these things would make Reagan an unlikely, if not impossible, choice for Republican nomination today. In the 80’s, he was able to garner enough votes, and ultimately ushered in what modern day commentators refer to as the “golden age” of American Republicanism.

Reagan is largely referenced today for his successful efforts to cut taxes, balance the budget, and reduce the size of the federal government- all hallmarks of modern Republican economic policy. And he initially did this, instituting the biggest tax cut in history. However, after the initial tax cut, deficits began to rise. In response, Reagan increased taxes 11 times. This is held in stark contrast to today’s Republicans, many of whom have signed what is known as the “Taxpayer protection pledge”. Politicians signing it pledge to oppose any tax increase whatsoever.

The issue of immigration has also seen changes. Here, again, Reagan-era ideas have gone by the wayside.

“I believe in the idea of amnesty for those who have put down roots and lived here, even though sometime back they may have entered illegally,” said Reagan. This sentiment is not echoed in the current Republican platform, which denies amnesty to any who have entered the country illegally.

What led to this change in the Republican mindset?

Though certain Reagan policies differ from those today, the Reagan-era was the real beginning of the Republican shift to the right. In addition to championing relatively conservative economic values for the first time since the Great Depression, Reagan’s years in office also spurred what is known as the Evangelical right, or religious right. In 1980 all 3 candidates- Jimmy Carter, John Anderson and, of course, Ronald Reagan- identified themselves as “born again Christians”. Televangelism had become popular, hitting its stride around 1978. Huge “Megachurches” became commonplace across America. Religious programming drew nearly 7 to 10 million viewers weekly. Religious groups, outraged by the shifting views social issues became more politically active, looking to shift opinion on things such as abortion and gay rights. In 1979, Baptist minister Jerry Falwell responded to this and founded the “moral majority”- a Christian, grassroots political action group.

Reagan named Robert Billings, Moral Majority executive director, as a campaign advisor. The Republican party, looking to woo Evangelical voters, released a platform with a stance on social issues that more closely resembles the social platform voters are familiar with today. Abortion, previously noted in the 1976 Republican platform as “one of the most difficult and controversial (questions) of our time” and an issue about which we should have a “public dialogue”, became a target for change. The 1980 platform took an antiabortion stance. This paved the way for the current Republican platform’s recognition of an unborn fetus as a person with human rights. The current platform allows no exceptions, even in the case of rape or incest. Once an issue relegated to the sidelines, abortion is now one of the foremost issues for the Republican Party, beginning during the Reagan era.

However, while conservative policies during Reagan’s campaign and presidency did pave the way for modern Republicans, he was not wholly responsible. A large influence on Republicans in the last decade, the one that shifted the party farthest away from its historical positions by seizing on that 1980s conservative shift, is the grassroots movement known as the “Tea Party” movement. The Tea Party gained traction with the 2008 election of Barack Obama, at which time Democrats also gained control of Congress. In spite of the name, the Tea Party is not a political party, but rather an activist group that backs political candidates that champion “conservative values”. While the group has been accused of taking money from special interest organizations, their official platform is one against big-money and big-government: a group for the common American.

The group has higher percentages of white male members than the general Republican electorate, according to a Government and Society survey taken in 2010, just after the Tea Party’s rise. Their views, especially on social issues, are more extreme and absolute than their Republican peers. However it is a Government and Society survey taken that same year that truly shows the reasons for the Tea Party’s impact: they are active. 92% of Tea Party supporters were registered to vote at the time of the survey, compared to 75% of the general Republican electorate. Tea Party supporters also trumped general electorate Republicans in numbers when it came to contacting public officials, donating money, and attending rallies. Republican candidates must appeal to conservative values to keep their jobs. With conservative factions such as the Tea Party being so active, it is no wonder they have an oversized impact on election results.

These election results have put many Tea Party-backed candidates in Congress, where many have joined what is known as the “Freedom Caucus”- an ultra-conservative group that votes together on the issues. The caucus constitutes 36 of the 246 Republican members of the House of Representatives, but they have clout within the Republican party. They are credited, in part, for the downfall of Majority Leader Kevin McCarthy in his campaign to be the new Speaker of the House. They also vocally opposed previous Republican leader John Boehner, contributing to what many see as “gridlock” within the House during his time as Speaker.

And this gridlock is not emotional political rhetoric, it is apparent in numbers. After the government shut down over budget squabbles in 2013, a dismal 9 percent of Americans said they approved of Congress- the lowest approval rating ever. Throughout its term, Congress has stalled on the issue of the Affordable Care Act- attempting to vote it down in its entirety 6 times and appealing individual aspects of the plan on 54 separate occasions. The number of bills passed by the 113th Congress, only 297, was the second lowest in recent history.

“The House is broken, we’re not solving problems,” said Paul Ryan in his acceptance speech as House Speaker.

Though it is not accurate to place blame on any one party, it is clear that an increasingly polarized Congress is ineffective. The rise of conservative elements in the Republican Party has augmented this polarization. These groups and ideas not only veer from the traditional goals of the party, but they also fail to represent the goals of their own electorate by failing to compromise.

In spite of embracing conservative elements during his campaign, Ronald Reagan understood that hardline views were not necessarily conducive to successful politics. “They wanted all or nothing and they wanted it all at once. If you don’t get it all, some said, don’t take anything,” he said of extreme conservatives in his autobiography, An American Life, “I’d learned while negotiating union contracts that you seldom got everything you asked for.” Perhaps it is in regard to compromise that Republicans should, in fact, take their cues from Reagan more often.