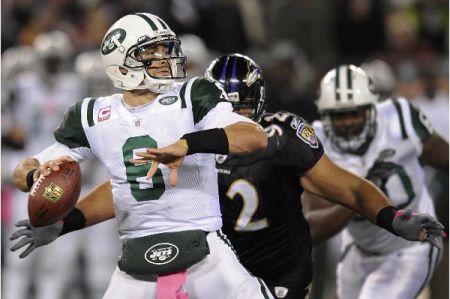 The Baltimore Ravens forced four turnovers and scored three times on defense in their 34-17 victory over the New York Jets on Sunday night.

Despite the fact that 51 points were scored between the two teams, only one touchdown came from an offensive play, a three-yard run by Ray Rice in the first quarter.

Baltimore’s (3-1) defense set the tone early when Ed Reed forced a fumble off of quarterback Mark Sanchez on the Jets (2-2) first play from scrimmage. Jameel McClain scooped up the loose ball and ran in it to the end zone to give Baltimore an early lead.

The Jets immediately responded, however, when Joe McKnight ran the following kickoff 107 yards for a touchdown.

After a field goal by Billy Cundiff gave the Ravens a 10-7 lead, Rice scampered from three yards out to give Baltimore a 10-point lead.

The Ravens forced Sanchez again to fumble on the opening drive of the second half, leading to another Cundiff field goal.

Haloti Ngata would force Sanchez to fumble a third time later on in the second quarter with Jarret Johnson returning the ball to the end zone.

Ravens quarterback Joe Flacco also had an off-night, completing 10 of his 31 passes for 163 yards and an interception late in the second quarter which was ran back for a touchdown by David Harris.

Baltimore would score their final defensive touchdown in the third quarter when Sanchez threw an interception to Ladarius Webb, which was returned 73-yards for a touchdown.

The Jets offense never got in gear as the team was only able to record seven first downs and held the ball for a mere 22:32.

New York travels to New England next week to face the Patriots (3-1) while Baltimore will enter their bye week.