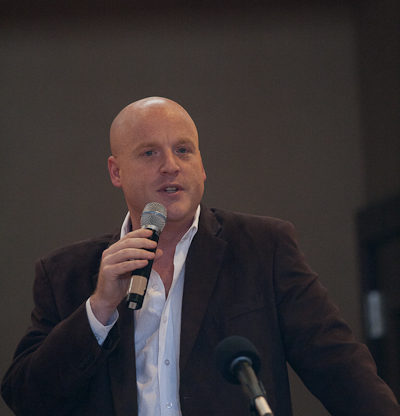 The “Wrongful Convictions, Miscarriages of Justice, and Other Critical Perspectives on the U.S. Criminal Justice System” lecture featuring Radley Balko was held on Tuesday Nov. 26, as part of the Senior Citizen Lecture Series sponsored by Professor Devlin and the Women’s Studies Program.

Balko is an author, Huffington Post senior writer and investigative reporter. He spoke about the differences between the military and the police force and the line between them becoming blurred over the years.

Balko first spoke of the police force SWAT (Special Weapons And Tactics) teams, which enter the homes of individuals during raids mostly for drug possession and drug use.

In his book “Rise of the Warrior Cop: The Militarization of America’s Police Force” Balko wrote much on the topic of drug raids and the increased amount of violent force used in situations of petty crime.

The military-type of violent tactics being used by the police were once only used as a last resort in the 1970s, but in the 1980s SWAT team raids became a regular occurrence and it has increased over the decades.

Violence and terror were shown on the screen while Balko played two videos involving SWAT team members entering the houses of suspects during a drug raid and killing innocent people and animals.

Balko spoke of the quote, “Democracy means that when there’s a knock on the door at 3am, its probably just the milk man” and how this statement has become less true over time.

Statistics show that police and SWAT team raids occur 100-150 times a day in the United States and having human and animal causalities is not unusual.

“When police officers are outfitted in military gear and are military trained, it changes their mindset,” said Balko.

Balko even played a game with the attendees called “Cop or Soldier” in which the audience were stunned by their incorrect guesses between the two, since police officers were fitted with the same weapons and camouflage that we associate with soldiers.

“I never understood the use of camo. They aren’t raiding forests, they’re raiding houses,” said Balko.

Soldiers don’t enforce day-to-day laws, and yet the police force is acting as if they are fighting domestic wars.

Balko said, “I spoke with a police officer who said that he felt as if he was in Afghanistan because he feels that his life is in danger every day.”

The police are given military grade weapons such as automatic rifles and tanks with machine guns. This is artillery fit for an army in regular towns, which seems highly unnecessary according to Balko.

But the federal grant money connected to catching drug crimes through SWAT team raids generates revenue for the police department. Along with the evidence that is seized which also goes back to the department itself creates more revenue and less reasons for the police to cut back on small drug crime raids.

To close out the lecture, Balko spoke of the unfortunate Cory Maye case, who was mistakenly raided with no warning and protected his daughter from the attack of a suspicious figure.

He shot the police officer in defense and was imprisoned for 10 years and eventually sentenced to the death penalty.

Even though he was let out of prison, he was forced to plead guiltily to manslaughter and spent a decade of his life in prison without seeing his family, all because of a botched raid.

These raids for petty crimes cause more chaos and terror than anything else.

Balko ended with the emphasis of violence used as a political statement, making the cons outweigh the pros when it comes to SWAT team raids.