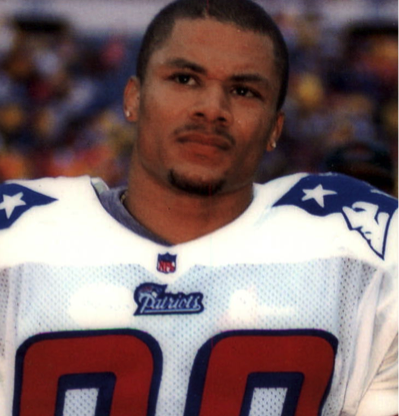 Terry Glenn was born in Columbus Ohio in 1974. He attended Brookhaven High School there and wound up being a walk-on player for Ohio State University in 1993 after obtaining an athletic scholarship to the school. After an accumulated 17 catches for a total of 266 yards from the 1993-1994 seasons, Glenn had a breakout year in 1995, recording 64 catches for 1,411 yards and 17 touchdowns. After that season, Glenn was recognized as a consensus first-team All-American and won the Fred Biletnikoff Award for being the nation’s top wide receiver in college football.

Glenn was drafted seventh overall in Round 1 of the 1996 NFL Draft by the New England Patriots. He soon thereafter signed a six-year, $12 million deal with the team. In his first season with New England in 1996, Glenn scored six touchdowns and recorded 90 catches for 1,132 yards. At the time of his rookie season, his 90 receptions were the most by any rookie in NFL history. To add to this impressive statistic, Glenn managed to obtain this record even after missing a game. The Patriots won the 1996 AFC Championship Game, but eventually lost to the Green Bay Packers in Super Bowl XXXI.

After the infamous head coach Bill Parcells left New England following the 1996 season, Glenn began a period of inconsistent play caused by personal struggles for three years. Between 1997-2000, Glenn was arrested for a domestic assault, failed a drug test, and left a practice session early due to paying disputes. However, in 1999 and 2000, Glenn was the Patriots’s leading wide receiver. Newly hired head coach Bill Belichick only allowed Glenn to play the first four games of the 2001 New England season due to his injuries and disputes with the coaching staff. However, Glenn caught the first career touchdown pass thrown by Tom Brady in a Week 5 29-26 overtime win against the San Diego Chargers on October 14th. That season, the Patriots went on to win their first Super Bowl championship in Super Bowl XXXVI, though Glenn did not formally receive a ring. Both Quarterback Tom Brady and head coach Bill Belichick would go on to cement their legacies as two of the greatest football stars to lead their respective roles.

Though he only played four games during the 2004 season, Glenn managed to tally 24 catches for 400 yards for two touchdowns. Glenn finished the 2005 season with a career-high seven touchdowns and 63 receptions for 1,136 yards, the most yards he recorded since 1999. In 2006, Glenn had 70 receptions for 1,047 yards and six touchdowns. Glenn then began suffering consistent injuries to his right knee and, in lieu of the fact that he didn’t sign an injury clause, was released by the Cowboys in July 2008.

Terry Glenn played with some of the finest NFL Quarterbacks of the 1990s-2000s. His illustrious list of teammate Quarterbacks includes: Drew Bledsoe, Tom Brady, Brett Favre, Vinny Testaverde, and Tony Romo. Though Glenn ran into the law five times between 2001-2011, he was promoted to being an offensive coordinator for the Texas Revolution for the Champions Indoor Football League in 2015, managing to paint himself as a reliable sportsman and trustworthy person. Glenn was survived by his wife, teenage daughter, and teenage son. He tragically died on November 20th, 2017 in a car crash in Irving, Texas at the age of 43.

Glenn once remarked that “It feels good to […] feel like I’m still respected and still wanted.” After recording 44 career touchdowns and seeing the social media responses to his death claiming that he was one of the leading wide receivers of his generation, it is safe to say that Terry Glenn surely is still respected.