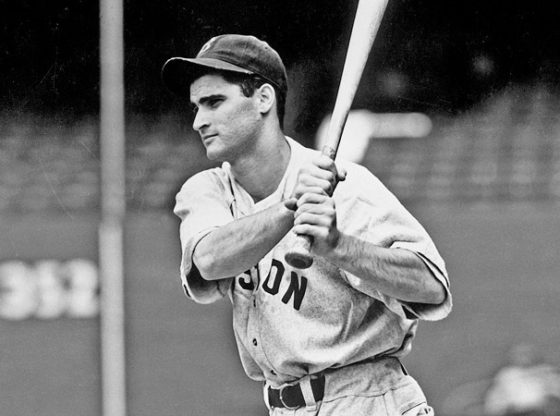 Bobby Pershing Doerr was born on April 7th, 1918. His middle name was a tribute to World War I U.S. Military Forces Commander John J. Pershing. Doerr pursued baseball as the role of a second baseman.

Bobby Doerr began his baseball career in 1934 at age 16 as a member of the Hollywood Stars of the Pacific Coast League. Two years later, Doerr met Ted Williams while playing for the league’s San Diego Padres. Williams, eventually nicknamed “The Greatest Hitter Who Ever Lived,” became good friends with Doerr as his Boston Red Sox teammate from 1940-1942 and again after World War II from 1946-1951.

In 1944, Doerr led Major League Baseball players in slugging percentage and accumulated a .325 batting average, only second to Cleveland Indians shortstop Lou Boudreau. Doerr was named the American League’s Most Valuable Player by The Sporting News. On May 17th 1944, Doerr hit for the cycle in a 12-8 loss to the St. Louis Browns. In 1945, Doerr missed a season while serving in the United States Army during World War II.

1946 served as one of Doerr’s best seasons. Though only hitting .271, Doerr drove in 116 runs that year. Doerr hit .409 in the 1946 World Series, tallying three RBIs and a home run. However, the Red Sox lost that World Series in seven games to the St. Louis Cardinals. Doerr finished third in the 1946 race for AL Most Valuable Player. His Boston teammate and good pal Ted Williams took home the award.

Doerr had a slow start to the 1950 season but finished strong with a .294 average and a league-leading 11 triples. The 1950 season saw Doerr set career highs with 11 triples, 103 runs scored, and 120 RBIs accounted for. Doerr tied his career high in home runs with 27 in 1950 and retired in September of 1951 after suffering from back problems.

After serving as a Red Sox scout from 1953-1966, Doerr was named the team’s first base coach in 1967 under new manager Dick Williams. That same year, the Red Sox conducted their incredible season dubbed “The Impossible Dream,” ultimately winning the AL pennant for the first time in 20 years. Though Boston lost the 1967 World Series in seven games to the St. Louis Cardinals, their 92 win-70 loss 1967 season is universally regarded as being responsible for the re-popularization of baseball all across New England.

In his personal life, Doerr was married for 65 years to Monica Terpin from 1938 until her death in 2003 after a long battle with multiple sclerosis. The couple had one son, Don. Doerr was inducted into the Major League Baseball Hall of Fame in 1986 and his number 1 was retired by the Red Sox on May 21st 1988. Though suffering a minor stroke in 2011, Doerr attended the 100th anniversary celebration of Fenway Park, the iconic stadium of the Red Sox, on April 20th 2012.

Doerr’s popularity was rejuvenated in the late David Halberstam’s book “The Teammates: A Portrait of Friendship” from 2003. The book is an ode to the friendship of Red Sox players Doerr, Dom DiMaggio, Johnny Pesky, and Ted Williams, the latter of whom affectionately referred to Doerr as “the silent captain of the Red Sox.” The book proved so popular that it influenced a statue to be made of the four players outside Fenway Park.

All in all, Bobby Doerr was characterized as a silent person but proved that actions are louder than words by being widely regarded as one of the best defensemen of his generation based off of his wise play. Though he only appeared in one World Series and never came away with that championship ring, Doerr constantly proved himself to be one of the league’s’ best players on and off the field during his 14-year career with the Red Sox. Longtime rival Tommy Heinrich, right fielder for the New York Yankees, praised Doerr by claiming that he was “one of the very few who played this game hard and came out of it with no enemies.”