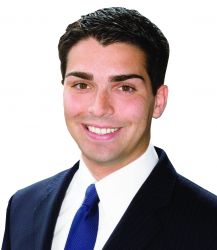 Eric Ulrich, 28, graduated from St. Francis College in 2007 and is a Queens Councilman and the youngest member of the city council.

The Republican councilman was born in Ozone Park, Queens and attended high school at Cathedral Prep Seminary in Elmhurst, with plans to become a priest. After graduating high school, he became interested in politics and enrolled at St. Francis College on a full scholarship.

Ulrich graduated in 2007 with a bachelor’s degree in Political Science.

He was then re-elected in the November general election of 2009 and defeated Democrat Lew Simon 53 percent to 47 percent in this year’s election.

Since he has been in office, Ulrich has targeted issues such as graffiti, vandalism, and illegal dumping on streets. He was responsible for the installation of new garbage cans on the 101st Avenue business strip in Ozone Park, where litter was a major problem and caused store owners to be fined.

He also brought SAT prep programs to public schools within the district.

Ulrich has implemented participatory budgeting, a democratic process in which residents vote on how the district’s discretionary funds should be spent. He supported the idea of a installing a pedestrian plaza on the Queens-Brooklyn line.

Expanding participatory budgeting to other neighborhoods is among the list of things he plans to do during his new term.

“I was the first council member to bring participatory budgeting to Queens in the Rockaways. I would like to see some more of my colleagues engaged in this process. It’s a wonderful, wonderful thing,” Ulrich said.

He also plans to create more jobs within his district.

“In the next four years I look forward to working with the new administration on passing laws that help create jobs and make New York City an affordable place for people to stay and build their careers,” Ulrich said.

Ulrich is an active member of several organizations in the district including Knights of Columbus, Kiwanis Club of Howard Beach, Jamaica Rotary, and the 102nd Police Precinct Community Council. He was formerly a member of Queens Community Board 9.

Ulrich’s wife, Yadira Moran-Ulrich, also graduated from St. Francis in 2002 with a degree in Psychology, began working in the Human Resources department in 2007, and is currently the Assistant Director of the department.

They met at the college in 2007 and got married in 2009. They have a one year old daughter named Lily and reside in Lindenwood, Queens.