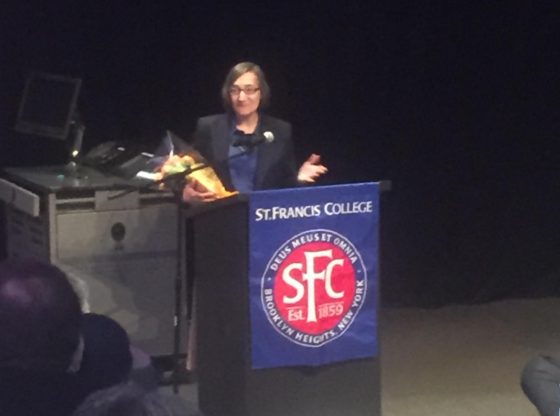 The Half-Past Twelve Concert Series concluded today, April 18, with a performance by the Arianna String Quartet in Founders Hall.

The concert was dedicated to the retiring Chair of the Philosophy and Religious Studies Department at St. Francis, Dr. Sophie Berman.

The quartet played two pieces, both of which had a surprising connection to Dr. Berman, unbeknownst to the concert’s coordinators. Dr. Berman had attended a concert at Carnegie Hall just last week, where the first piece—Credo by composer Kevin Puts—was played. The second piece, a four movement composition titled String Quartet in G Minor, Op. 10 by French composer Claude Debussy, resonated with Dr. Berman because of her own French heritage.

“The Concerts at Half-Past Twelve have been very uplifting for me,” Dr. Berman said, “And they have been a huge part of my time at St. Francis.”

The performers in the quartet—violinists John McGrosso, violist Joanna Mendoza, and cellist Kurt Baldwin—are all Professors and Artists in Residence at the University of Missouri.

McGrosso spoke for the quartet, saying, “It is an honor to be here today and to get to play such exciting works.”

The St. Louis-based group has earned their spot as one of the country’s preeminent string quartets, traveling the world to perform. Their most recent international engagements have taken them throughout North America, South America, Europe, and Asia.

They were also featured guests on NPR’s “Performance Today” and “Live from Music Mountain,” which broadcast in 125 cities across the US and 35 countries around the world.

This is the second time the group has played in Founders Hall. The first was two years ago when they were invited to St. Francis to commemorate the retirement of Dr. Francis Greene, who is now a Professor Emeritus in the Fine Arts and International Cultural Studies departments.

The quartet’s performance challenged St. Francis students to look at classical music differently. The program was broken up into various exciting movements, and the players were dramatic in their performance.

Next year’s Half-Past Twelve Concert Series will commence in the fall and will offer several similar exciting performances for St. Francis students and staff.