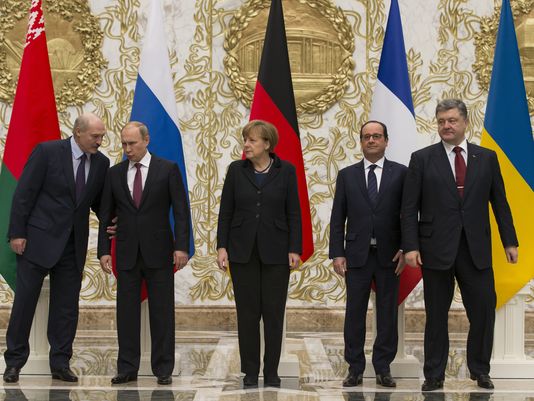 16 hours of peace talks in Belarus came to a close with Russian president Vladimir Putin announcing a new cease-fire deal with Ukraine.

Putin announced to reporters, according to Time, that the ceasefire will begin on Sunday, February 15th. It is still unclear whether Ukraine and pro-Russian rebels have agreed to the terms.

The ceasefire talks came as the result of an initiative by France and Germany following an increase in fighting between Russia and the Ukraine. The fighting has placed mounting pressure on the United States to provide arms to the Ukrainian military.

Reuters has calculated according to official Ukrainian figures that more than 5, 000 people have lost their lives in the conflict. Sanctions have been imposed by the international community on Russia as a result of its actions towards Ukraine.

The ceasefire is to be overseen by the Organization for Security and Cooperation in Europe, a European-wide security body, and French president Francois Hollande has announced, according to Reuters, that, “the coming hours will be decisive.”

The ceasefire agreement comes as a glimmer of hope for those affected by the ongoing struggle. The actual effect the agreement will have is yet to be determined. “It is very important that words are followed by actions,” said German Chancellor Angela Merkel, according to Reuters.

After word of Saturday’s ceasefire spread to the front-lines on February 13, BBC fielded reports of “intense fighting” in Eastern Ukraine.

BRIAN WILLIAMS UNDER FIRE
SHADES OF JUSTICE: WILSON ON MINORITIES IN CRIME-RELATED ENTERTAINMENT