Psychology Career Day: A Look Inside the Surprising Variation of Jobs that All Majors Should Consider

Home /News/Psychology Career Day: A Look Inside the Surprising Variation of Jobs that All Majors Should Consider 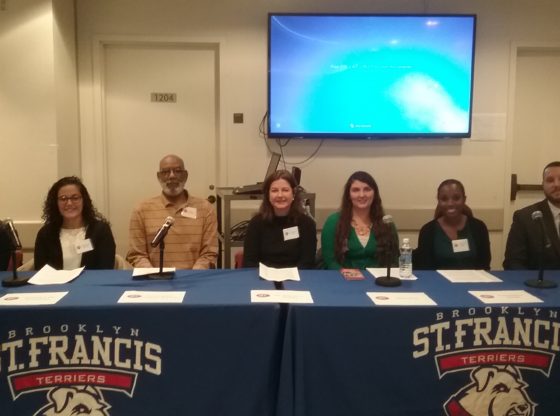 The event was a chance to learn from graduated psychology majors and ask them questions on everything from their education and the organization they worked for to the responsibilites of their jobs and how a student can better their chances of working in these fields.

First the panelists introduced themselves with short biographies:

Erin DeSilva was first a biochemistry major in Ithaca college before coming to St. Francis and completing her degree as a psychology major and minor in forensic science. She then graduated John Jay with a Masters in forensic psychology. She teaches an array of psychology classes at SFC about personality, abnormalities, women and lifespan development. DeSilva started working as a federal probation officer as of September 2016, which deals with keeping an eye on people on federal probation or released after being convicted of a federal offense. Unfortunately she had to leave the panel early for work purposes.

Christopher-Cooper Furtick had intentions of first becoming a Presbyterian minister. Through his career he has been a teacher, health care administration and after studied management at Lehman College and Psychology at the New school earning a master’s degree and starting a doctoral program. He found himself back in teaching this time at special need NYC high schools, always finding time for volunteer work at Catholic Charities and others that support high-risk childern.

Dr. Rebecca Oakes has an MA in Counseling Psychology from the University of Denver and PhD in Educational Psychology from the Graduate Center of the City University of New York. She has worked as a Family Case Planner for Catholic Charities which deals with at risk families and foster care. She has also been the Director of Psychology at the Crossroads School for Child Development, consultant for the University Settlement and The Administration for Children’s Services. Also adjunct lecturer at Brooklyn College and Queens College. Currently she does private practice with children and families.

Gina Piro earned a BA in Psychology and minor in Cross-Cultural Psychology from St. Francis College last spring. She was part of PSI CHI and Alpha Lambda Delta Honors societies and got the Dr. Louis H. Primavera Medal in Psychology. She had internships at Maimonides Infants & Children’s Hospital, Peer Counselor at the SFC Career Center and the Human Resources Department at Henry Street Settlement which she currently works at now.

Cassandra Seide graduated from St. Joseph’s College with a Bachelor of Arts in Psychology and Speech Pathology, She also received a Master of Arts in Mental Health Counseling and Wellness from New York University. She has worked as a Supervisor in Mental Health Housing and currently is a Clinical Director who helps run lower income housing programs.

The panel consisted of the professionals being asked questions such as “What do you do in a typical day on the job?”, “Which part of your job is the most rewarding and which is the most challenging?”, “How important are internships?” and “How do you act during a job interview?”

Each panelist had a unique outlook on daily tasks and used their psychology background differently, some like Furtick and Dr. Oakes working with children and helping those in need. Others like Desilva and Seide work closely with law and government.

Piro standing out with her current work in Human Resources but all the professionals found their psychology background greatly helping them as they worked with people. The varieties of fields that psychology majors can go into shows just how useful the degree is.