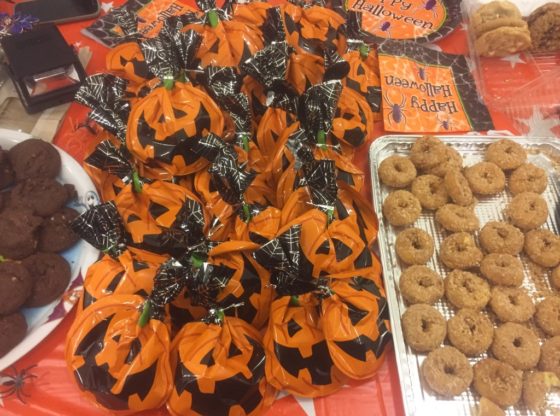 Today, October 27, the Psych Club and English Club are having a joint Halloween bake sale in the cafeteria.

They have a colorful table full of Halloween-themed goodies, including decorated cupcakes and cookies that the members of the clubs baked themselves.

“We’re raising money for our club for later events, for meetings, for other events that we plan on doing,” Leyla Dereyayla, Treasurer of the English Club, told SFC Today. “We wanted to collaborate with another club just so that members of the Psych Club, members of the English Club, can come together and talk with one another and just make connections with each other,” she said.

English Club President Arber Sejdiu–who baked homemade pumpkin pie bites for the event–told SFC Today, “[The event is] truly marvelous I would say. Teaming up with the Psychology Club and Psi Chi in bringing sweetness and spice–pumkin spice–and cheering up the masses on a rainy day.”

Representatives of both clubs are selling their baked goods at the table, so students who are interested in joining either organization can stop by to ask questions about how to join and the clubs’ upcoming activities.

They have raised approximately $20 so far, and they are hoping to continue raising money for the rest of the day.

“We’re going to be here as long as we can, as long as they don’t kick us out,” Dereyayla joked.

Stop by the cafeteria today to pick up some Halloween treats and learn more about SFC’s Psych and English Clubs.