PRINT IS NOT DEAD

Home /Opinion/PRINT IS NOT DEAD 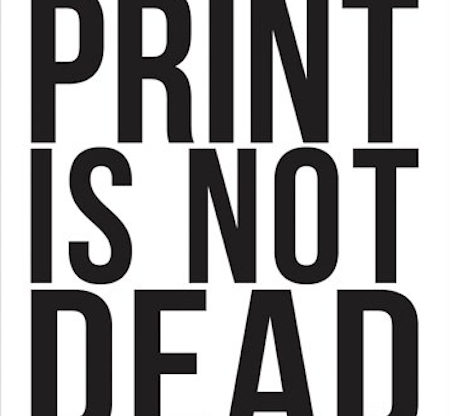 “Print is dead,” seems to be the new slogan across the country but is it really true?

Journalists, professors and students are discussing this topic as advances in technology continue to have a significant impact on the printing industry. More people are carrying Ipads, Nooks and Kindles but there is still a demand for newspapers and hardcover books.

I also witness a number of individuals reading newspapers and books on a daily basis. If this is the case, how could print actually be dead?

The print industry is not what it used to be, and has gradually changed as a result of the increase of free information on the Internet.

With social media on the rise, the way we receive and process information has definitely evolved. We no longer receive news in minutes, but in seconds.

Gary Meo, Senior Vice President of Print and Digital Media Services at Scarborough Research, said: “While our data does show that print newspaper readership is slowly declining, it also illustrates that reports about the pending death of the newspaper industry are greatly exaggerated…Given the fragmentation of media choices, printed newspapers are holding onto their audiences relatively well.”

There are still many people who love to sit and read The Wall Street Journal, while drinking a cup of coffee on a Saturday morning.

The older generation, while slowly getting on board the train of technology, continues to subscribe to print publications and ask for the latest hardcover book as a birthday present.

There is a superior value in print. Once an article goes to press, there is no turning back. Everything must be perfect. However, with online news, changes can be made in seconds. As an author, there is no better feeling than seeing your byline on an official printed paper. As the News Editor for SFC Today, I have appreciated the strength in both print and online news.

Editing standards for a print edition are much higher, especially in regard to error correction. Print is permanent but changes can be made instantly online.

There is also value in holding your work in your hand compared to seeing it on a computer screen. In the past, when I received an article about a good race I participated in, I am always excited to share the article with my family. When I received press online I felt it was not as valuable.

After learning that Borders filed for bankruptcy last year, some people feel that “hard copies” of books will soon cease to exist. E-readers such as the Ipad, Nook and Kindle were some of the hottest items last holiday season. However, books should not be discontinued because of these new technologies.

According to an article written by Samuel Weigley of International Business Times, “In all, 29 percent of Americans owned at least one of the devices by January, up from 18 percent in mid-December. Most likely to own one or both of the devices were those between the ages of 30 and 49, college graduates and those with a household income of $75,000 or more. Least likely owners were those aged 65 and over, those without a high school degree and those with a annual household income of less than $30,000.”

The Ipad costs approximately $500.00 whereas you can get The Nook or Kindle for about $150.00. Basically you are paying to “store your books.” However, many people fail to realize that the books bought on these products are not cheaper than the hard copy.

This piece of information is in the fine print. For example, if you go on amazon.com Nicholas Spark’s bestselling novel The Lucky One is $7.99 and the e-book version is also $7.99. In this case, the reader is saving no money by purchasing the e-book version. In my opinion, it is better to have the hard copy book to put on your book shelf and share with your friends and family.

Last year, I attended three book signings by three of my favorite authors. Each of the events were held at a bookstore. It was at the first event in March that I realized print is very much alive. At the Jillian Michaels book signing on a Tuesday evening at 7 p.m., there were over 3,000 people in attendance; 3,000 people holding a “hard copy” of the book in hand. There were similar turnouts at other events I attended last semester.

I believe that most authors would want to see their name across the cover of a book as opposed to a computer screen. As a writer, it is my dream to one day host a book signing event in which my fans can attend and support my latest book.

I feel that as long as there are authors, there will be print. Newspapers, magazines and books can be touched, collected and shared with friends and there is a great deal of value in that.