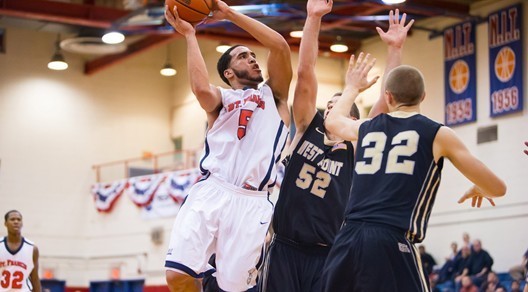 Men’s Basketball: Terriers look to get off the shneid with a win tonight over the Central Connecticut State Blue Devils.

After dropping two in a row the Terriers will try to get back on the right track with a win tonight against the Central Connecticut State Blue Devils.

The Terriers are coming off a rough little two game stretch where they dropped games to first place Robert Morris and rival LIU Brooklyn. With only five games remaining every game is crucial for the Terriers, who are sitting in fourth place in the NEC.

A win tonight would be a step in the right direction for the Terriers. The last time they played the Blue Devils, they put together a nice game knocking them off 76-66 on the road. They need more of the same results tonight at home, where the Terriers have been so good all season long.

The last time these two teams meet the Terriers were led by Junior forward Jalen Cannon who had a solid night scoring 20 points and grabbed 10 rebounds. He was able to create from the outside, as he made two three pointers which has been an aspect of his game which is much improved.

Cannon has been a force all season long for the Terriers, but over the last two games he was held in check by both Robert Morris and LIU Brooklyn. Look for Cannon to score early and often as he will be looking to have a big game after a pair of quite ones.

In their last meeting the Terriers also got a very nice performance from Junior guard Brent Jones. Jones who is the teams floor general was in the midst of a coming out party the last time these teams meet. Jones scored 12 points and dished out 11 assists, he was able to create for his teammates by getting to the basket and making slick passes.

All season long the Terriers have made a conscious effort to defend with high intensity. That will be the key to victory tonight, if they can defend at the high level that they have all season long, it will lead to offensive opportunities.

In the last meeting the Blue Devils leading scorer Junior guard Kyle Vinales was out due to injury. He will be in action this evening and the Terriers must be aware of his presence due to his scoring ability.

Junior forward Faronte Drakeford had a strong game in their last meeting. Drakeford scored 18 points and grabbed 5 rebounds. He was able to cause problems for the Terriers by driving to the basket and scoring down low. Who ever is guarding Drakeford must keep him infront of them because once he makes his move to the basket he is very efficent.

This is a big game for the Terriers who are in need of a win. They are currently in 4th place in the NEC, but there are a cluster of teams right round them. They need to win ball games and break away from the pack, as the playoffs are right around the corner.