Home /Entertainment, News/Pink Floyd’s The Dark Side of the Moon 45 Years Later 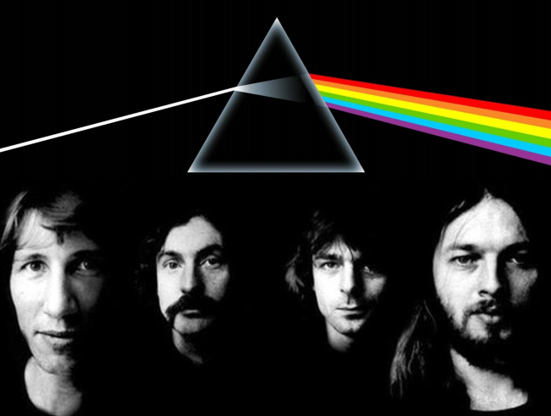 Pink Floyd’s album The Dark Side of the Moon was released 45 years ago this past month.

The band’s eighth official studio album, The Dark Side of the Moon was originally released on March 1st, 1973. The album almost immediately topped the “Billboard Top LPs & Tapes” Chart for a standard week and remained on the charts for a record-breaking 741 weeks from 1973 to 1988.

The Dark Side of the Moon sold over 45 million copies worldwide, making it one of the world’s best-selling albums of all time.

But what makes the album so successful? A look at the many factors that make The Dark Side of the Moon the iconic album which it is today:

The band Pink Floyd itself was as successful as the album The Dark Side of the Moon.

Though co-founding member and original guitarist Syd Barrett was alienated from the band due to the combination of his mental breakdown and his pursuit of an independent career by 1968, the four principal members of Pink Floyd enjoyed an influx of commercial and critical success throughout the 1970s. Bassist and principal songwriter Roger Waters (left in picture), Drummer Nick Mason (second from left in picture), Keyboardist Richard Wright (second from right in picture) and Guitarist David Gilmour (right in picture) gained popularity in London’s Underground music scene in the late 1960s.

By the early 1970s, Pink Floyd had been making a steady income behind the strength of their 1972 soundtrack album Obscured By Clouds and Documentary Film Live at Pompeii, released that same year.

The Dark Side of the Moon opened to rave reviews regarding the musical innovations of Pink Floyd and was certified Gold in the United States before it’s two-month release anniversary. The Dark Side of the Moon increased Pink Floyd’s mainstream presence and it, along with their following three albums (1975’s Wish You Were Here, 1977’s Animals, and 1979’s The Wall), helped establish the band as concept album maestros.

Late musician and music journalist Robert Sandall stated that The Dark Side of the Moon had “lots of traditional Pop values” in that “you could sing along to these songs” but it also was an album that “took you places if you wanted to listen to it in a darkened room.”

The total playing time of the record is around 43 minutes. Both Side A and Side B address omnipresent topics that still intrigues listeners of today.

Side A is filled with messages for the listener correlating with everyday aspects of life.

The album’s first two tracks, “Speak to Me” and “Breathe,” stress the importance of living one’s own life while alluding to the fact that the threat of madness is present in everyday aspects of life.

The third track, a synthesizer-driven instrumental piece entitled “On the Run,” expresses the anxiety of modern travel.

The first side’s longest song, the fourth track named “Time,” offers a warning to those who focus on the mundane and examines how time controls one’s life.

The final track on Side A, “The Great Gig in the Sky,” is a vocalized instrumental piece by Pink Floyd pianist Richard Wright and session vocalist Clare Torry that serves as a soulful interpretation on death.

Side B begins with “Money,” a Blues-Rock tune that expresses the dangers of consumerism with financial sound effects such as cash registers and loose change. Ironically, “Money” was the album’s lead single, eventually becoming the most commercially successful track on The Dark Side of the Moon.

The next track, “Us and Them,” is the album’s longest track at 7 minutes and 51 seconds that addresses depressed isolation and conflict within humane relationships.

Next, “Any Colour You Like” is a guitar-driven instrumental track that elucidates lack of variety in life.

The album’s penultimate track, “Brain Damage,” outlines how fame and success can lead to mental illness and an oversight to one’s own needs.

Finally, the album’s tenth and final track, “Eclipse,” explores concepts of unity and how life’s progress can by hindered by an eclipse of the Sun.

Many of the lyrics and topics alluded to in the songs on The Dark Side of the Moon struck a chord with many listeners that still resonates with people upon modern listening.

Pink Floyd Bassist Roger Waters, having written the lyrics to all of the album’s songs, claimed that The Dark Side of the Moon was “an expression of political, philosophical, [and] humanitarian empathy that was desperate to get out” in an episode of Classic Albums. In that same episode of Classic Albums, Pink Floyd Guitarist David Gilmour claimed that “the ideas [in the album’s songs] apply to every new generation” because “they still have, very much, the same relevance as they had” in the early 1970s.

Many songs on The Dark Side of the Moon include interview recordings, sound effects, and tape loops.

The audio recordings of interviews include many of the band’s acquaintances talking about various topics that many can still relate to in the modern day.

The sound effects primarily consisting of machinery are also heard by many today, evoking mundane elements into the record’s tracks.

The tape loops included on the record were played at various speed to convey varying atmospheric sensations that still has the power to chill listeners 45 years later.

The Dark Side of the Moon includes songs incorporated with Ambient, Blues, Electronic, Jazz, Progressive, Psychedelic, and Soul elements into a primarily Rock creation.

Upon first listening to the record in 1973, many people were introduced to a new kind of blooming underground music genre, Progressive Rock. The Dark Side of the Moon not only established the standard for Progressive Rock albums, but it also influenced the rise of new music genres such as Alternative Rock, Art Rock, Electronica, and Indie Rock.

From a visual standpoint, The Dark Side of the Moon is one of the most visually striking images in art history. Keyboardist Richard Wright requested the album cover to be “simple and bold.”

The cover of The Dark Side of the Moon included the depiction of a light entering a prism and its resulting dispersed color beams (seen above the portraits of the band in the picture). Hipgnosis originally gave Pink Floyd seven possible design choices, but the band unanimously agreed that the prism artwork was by far the best.

The packaging for The Dark Side of the Moon included a vivid inner gate-fold with heartbeat imagery from the album’s songs and the lyrics to those tracks. The color dispersed through the cover’s prism extends throughout the album’s inner gate-fold, creating a never-ending expansion of light.

Psychologist Carl Jung defined synchronicity as a phenomenon in which many coincidental events may “seem related but are not explained by conventional mechanisms of causality.” Synchronicity, relating to its Communications definition, is the art of playing a muted cinematic film whilst simultaneously playing a separate soundtrack over it.

In Indiana during August 1995, Fort Wayne’s The Journal Gazette published the first widespread article on the media practice of synchronicity, named after Jung’s theory. The Gazette cited a Usenet discussion group titled alt.music.pink-floyd and soon afterwards, Boston radio DJ George Taylor Morris discussed playing the 1939 classic film The Wizard of Oz over Pink Floyd’s 1973 album The Dark Side of the Moon.

The film, titled Dark Side of the Rainbow, is believed by many to follow the various elements of the theory of synchronicity. Followers are instructed to play The Wizard of Oz DVD on a TV’s “mute” volume setting while playing The Dark Side of the Moon on a stereo or radio, resulting in many to believe that the film synchronizes with the album when both are played at the same time.

The film grew in folkloric popularity, as MTV News featured a segment on it during the mid-1990s and Turner Classic Movies aired a version of the movie Dark Side of the Rainbow in July 2000.

The Dark Side of the Moon‘s album cover is believed by many to correlate with The Wizard of Oz‘s shift from a sepia-tinted Kansas to the fictitious town of Oz, displayed with graphic Technicolor (becoming one of the first cinematic films to do so in the process). Furthering the lore of the film are the dramatic music changes (such as when The Wizard of Oz’s tornado scene syncs up with the screaming section of “The Great Gig in the Sky”) and thematic imagery (including the movie’s colorful Oz door opening with the sound of the cash register-clinking sound effects from Pink Floyd’s song “Money” as well as the Scarecrow dancing in the field with Dorothy in the film during the lyrics “The lunatic is on the grass” from the album’s song “Brain Damage”) from Dark Side of the Rainbow, respectively.

Nevertheless, the film has contributed to the album’s unique contents that keep its popularity alive today in all forms of media.

In conclusion, The Dark Side of the Moon‘s everlasting success is the result of; the band, the songs, the music, the cover, and the lore in correlation with the popular album.