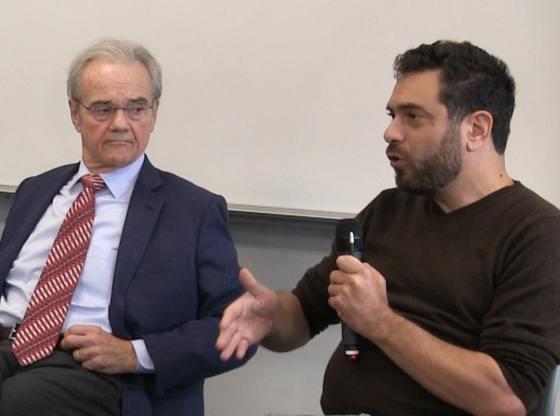 It’s no secret that politics across the nation have become increasingly polarized. New York is no exception. Alas, New York City and New York State have been hit with immeasurable pretense and vice at the hands of our elected officials. On Thursday, October 19 2017, SFC Philosophy professor Clayton Schoppa moderated a lecture regarding politics in New York. Hosted by SFC Scholar in Residence Fred Siegel, the panel consisted of two main speakers: his son Harry Siegel from the Daily Post and Michael Goodwin from the New York Post.

Michael Goodwin started by describing the New York State and City governments as some of the worst in America. Goodwin came to this conclusion based on a number of factors, including corruption cases, tax burdens, Medicaid fees (New York’s Medicaid costs are higher than Texas and California combined roughly sixty million people vs. twenty million, and the latter cost more), education expenses per capita, litter, traffic, etc. He reasoned that a major cause of the problems in New York government stem from a low voter turnout, and referred to the 2014 Cuomo vs. Astorino election in which only about 33% of the population voted. Areas in New York are either dominated by Democrats or Republicans, and if an area is notorious for being a solid red or solid blue zone, opposing parties don’t even put up candidates. Goodwin stated that “the corruption is the clear consequence of low voter turnout and single party rule”. The system of checks and balances depends on a two party dynamic, but this is difficult to implement when one party dominates.

Goodwin then elaborated on corruption, and said that in his opinion, corruption is a clear consequence of low voter turnout and single party rule. He mentioned that both incumbent governor and mayor of New York were investigated by federal officials, and since unscrupulous individuals are in power, it is likely that there will be fewer corruption cases but more corruption. According to Goodwin, the approach of New York government is similar to that of George W. Plunkitt, in sync with the “I seen my opportunities and I took ‘em” approach. It’s a big picture, and unfortunately not a pretty one.

Harry Siegel agreed that New York is not in good shape, not the city and not the state. However, he said that when a city is in imminent crisis, the calamity helps people participate in government. According to Siegel, New York is not in a predicament at the moment and current events are “chicken little…until the sky falls”. The blatant acts of corruption in New York are nothing new, and “personal friendship” is the frequent justification for bribery. Still, according to Siegel, there is no political accountability until policies/ agendas collapse (e.g. police reform, education), which Siegel said have not yet collapsed under De Blasio’s watch.

He declared that there have been very few progressive mayors in New York, and, in addition to lack of accountability present in our government today, corruption will continue to flourish in New York City and New York State – “that’s the sleepwalking system we have and will continue to have…it’s…unfortunate…that neither the hard left…the Centrists, or Republicans have built any sort of serious or sustaining political structure…so what we have is a system of semi-ambitious people who want chauffeurs, little staffs [and power] can do whatever they want as long as it’s not that consequential…it will keep being “good enough” right until it isn’t [anymore]”.

Evidently, the journalists had their difference in opinions, but they also established common ground. The full video of the lecture can be found on the SFC website.

5 Reasons SFC is the best college in New York City
Psychology Career Day: A Look Inside the Surprising Variation of Jobs that All Majors Should Consider