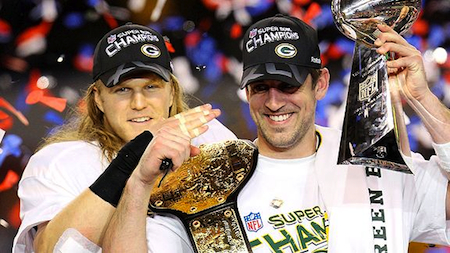 On paper, Super Bowl XLV was supposed to be a defensive battle between two of the top defenses in the NFL. However as soon as the game started, that “paper” quickly turned into garbage.

After the Packers won the coin toss, they deferred to Pittsburgh. After 3 plays, the Steelers punted the ball right back to the Packers.

With just under four minutes left in the first quarter, quarterback Aaron Rodgers connected to Jordy Nelson for a 29 yard touchdown catch to put the Packers up by seven. The Packers offense responded to the atmosphere of the Super Bowl very quickly. Now it was time for the defense to step up. Ben Roethlisberger stepped back to throw looking for his receiver Mike Wallace, but it was underthrown.

Nick Collins intercepted the underthrown pass and took it to the end zone for a touchdown and just like that the score was 14-0 Green Bay. The chants of “Go Pack Go” were echoing through Cowboys Stadium.

Pittsburgh put three points up on the scoreboard with a 33 yard field goal midway through the 2nd quarter. Not to be outdone, Aaron Rodgers went to his number one receiver Greg Jennings for a 21 yard touchdown pass on the next Packers possession.

As Ben Roethlisberger watched Jennings catch the touchdown on the jumbo-tron, he knew he had to answer back before the Packers got the ball back at the start of the second half. With less than two minutes left before halftime, Big Ben connected with 15 year veteran wide receiver Hines Ward for an eight yard touchdown hookup.

At halftime, the players from both teams cleared the field for the halftime show starring the Black Eyed Peas, the score was 21-10 Packers.

What was supposed to be a battle of the defenses turned into an offense shootout. The Pittsburgh defense stepped up in the 3rd quarter holding the Packers to zero points. Rashard Mendenhall punched the ball right up the middle and into the end zone for another Steelers touchdown.

The Packers fans were super quiet as they watched their lead get cut short by the resurgent Steelers.

Star cornerback had to watch the 2nd half from the sidelines as he suffered a collarbone injury and the Steelers would later on take advantage of this.

This all leads to the 4th quarter with the score at 21-17 Packers. Rodgers would hook up with Greg Jennings again, putting the team on his back and scoring another touchdown. The Packer lead was now extended to 28-17 and they saw victory in their sight.

Pittsburgh was not going down without a fight. Mike Wallace, who had 89 receiving yards total in this game, earned 25 of those on a touchdown pass late in the 4th quarter. Charles Woodson watched in anger as he saw his replacement allowing Wallace to score on him.

Instead of going for the conventional extra point, Pittsburgh went for and successfully made a two-point conversion, using the option run, a play only seen in college and rarely in the NFL.

Green Bay would add on a field goal later in the 4th to make it a 31-25 game. Pittsburgh had one chance left to come back and potentially win this game. For one last stand, the Packer defense rallied together and stopped the Steelers on the final drive. With an incomplete pass thrown by Roethlisberger the Green Bay sideline went into a huge frenzy.

Aaron Rodgers kneed the ball two times and the game was over. Finally, Aaron Rodgers doesn’t have to hear about Brett Favre anymore, he just lead the Packers to a Super Bowl victory. Throwing for 304 yards and three touchdowns, he was named MVP of Super Bowl XLV.

The Lombardi Trophy came back home to the Packers and an Aaron Rodgers lead Packer team hoisted the trophy as champions of Super Bowl XLV.