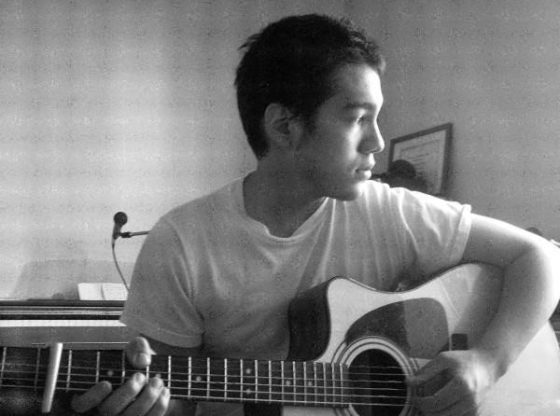 Senior Mike Ortiz, born and raised in Manhattan, has a true passion for music.

You may see Ortiz singing in the rock lounge or just walking in the halls but either way SFC has had a major impact on him, not only as a student, but also, as an artist.

“My experience has been a roller coaster, emotionally as a freshman you didn’t really know what to expect—it’s a small school—you hope everyone would be nice and as you go along you make a lot of friends—and you start realizing you pretty much know everybody and it becomes a family,” said Ortiz.

In high school, Ortiz had a dream to be a musical theatre major. However, after graduation Ortiz realized his musical dreams need a back up plan so he decided to become advertising major.

By being an advertising major Ortiz has learned how to better promote himself as an artist in the digital media world today.

Still living at home with his parents, Ortiz converted his spare bedroom into a recording studio. Today he not only records his own tracks in the studio, but also, has other musical vocals come to his studio to record.

Being a full time student and music artist Ortiz spends his weekends being a doorman at Chart House in Manhattan. He has been working there on the weekends for over three years. Ortiz saves his money to buy new equipment for his studio. Such as microphones and instruments. “Its hard to juggle school, homework and the work on the weekends,” said Ortiz.

His music career began at a very young age of four. Mike is not the only Ortiz that has a musical gift. Ortiz is the youngest of three and his brother and sister had singing competitions and at a young age and Mike wanted nothing more than to be just like them.

“I would always try to be just like they and they would tell me—’ You are too young you can’t be doing that’—it motivated me to do better and learn instruments they didn’t know—and I just kept working at it everyday,” said Ortiz.

In high school, his musical talents really began to stand out.

Ortiz’s is always looking to enhance his vocals however; his vocals are not his only musical talent.

In college, he has mastered playing the piano and guitar and continues to learn the bass and the drums everyday.

“When I was first handed a guitar nobody told me I was holding it wrong or right—so I learned it myself backwards and I chose to learn a very hard song—Eric Clapton Tears of Heaven through YouTube” said Ortiz.

Ortiz would watch YouTube videos to study how artists positioned their hands on the guitar and somehow simulate that backwards.

“Music has made me opened to different cultures, different people—I can relate more to people because of music through performing and people who did and didn’t like my music it kind of molded me into this mellow but serious and sympathetic towards other peoples feelings—it has made me more aware of what is really going on around my circle,” said Ortiz.

Like many young artists, Ortiz looks up to some of the music greats including Ray Charles, Stevie Wonder, John Mayer, Jason Mraz and Selena.

“I try and go for R&B, Soul, Indie, Pop—I try to learn everything I can regardless of genre because you can always add your own funk to it and make your own sound,” said Ortiz.

Ortiz has been writing his own music since he was thirteen years old. He is currently recording an acoustic album. An album name and release date will soon be made public.

You can find Ortiz on his YouTube channel Mike Ortiz Music. “Its hard being consistent—but you have to make yourself consistent with uploading and connecting with your fan base,” said Ortiz.

Within the next five years, Ortiz hopes to expand his New York fan base by travelling to Los Angles for his music career. In ten years, his dream is to be performing at the Grammys. If his dreams get steered off course Ortiz will remain in New York working at public relations or advertising firm.

Ortiz’s advice for current college students is, “No matter how easy it is for you to avoid those obligations you have in your head—you need to put everything aside and do your dream—your dream is your dream and if someone wants your dream to happen more than you are going to have a serious hard time at evolving and becoming unique and original. Be consistent and open minded there is no such thing as bad criticism—learn on the way.”