OPINION: WHY IS TRADER JOE’S ALWAYS OUT OF STUFF?

Home /Opinion/OPINION: WHY IS TRADER JOE’S ALWAYS OUT OF STUFF? 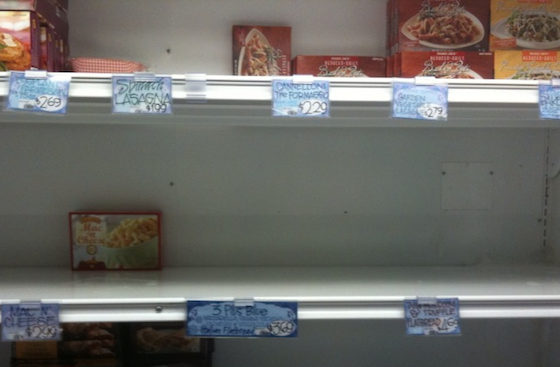 There was great excitement when it was announced that Trader Joe’s was to open a store at the junction of Court Street and Atlantic Avenue, just yards from St Francis College in Downtown Brooklyn.

However, just a few months on and many Brooklynites are frustrated with the new store because … it is always out of stuff!

Shoppers from all over Brooklyn who make the trek to Trader Joe’s with a list of groceries often leave with their baskets only half full.

Some of the shelves at Trader Joe’s look like shops from the Great Depression in the 1930s — bare and barren and bereft of the most basic supplies.

To find out why it is always out of stuff, I called the store telephone number, and an employee named Anthony answered.

I started by asking how many shipments they receive weekly. He hesitated … and said: “uh well we get several shipments a day.” He went on to say: “I don’t understand why you ask.”

I told him I was writing an article for my student newspaper and wanted to ask a few questions because that particular store is frequently out of ordinary groceries.

Suddenly, anthony the employee was not eager to answer any more of the questions that I wanted to ask him.

He politely told me that his store doesn’t contribute to articles like that and it is against their policy to comment. He then gave me the store’s corporate telephone number.

I phone called the store’s corporate number and spoke to a person named Amanda. I told her I was calling because their much-vaunted new Brooklyn store location is frequently out of items.

She was very nice and told me I should call that particular store’s manager. I told her I was just in touch with the store and they couldn’t help me and she apologized and offered to call the store manager herself and get back to me. However, I told her it wasn’t necessary.

On Trader Joe’s FAQ page it states they sometimes buy unconventional and interesting products that are only stocked for a limited supply.

Once the store sells through it, you won’t find it again. They also search overseas to find products that their customers may like.

They believe that shopping should be fun and not a chore. This still does not explain why they are often out of ordinary groceries such as milk, strawberries, blueberries — even macaroni cheese is like gold dust on some Sunday afternoons.

Their FAQ page also states they introduce 10-15 new products a week and in order to do so they have to eliminate 10-15 items in order to give the new items a fair chance.

This could explain why you don’t always find items in the store that you once purchased there.

In addition, it states that a lot of their items are only available when they are in season such as strawberries and blueberries. Therefore if it is not strawberry season you will not find strawberries.

This is perhaps understandable, and Trader Joe’s unique products are some of the reasons why their customers enjoy shopping there. BUT — it does not give them an excuse to be out of MILK.

OPINION: START WITH THE MAN IN THE MIRROR
REVIEW: UTADA ALBUM THE ONE TO CRACK US MARKET?