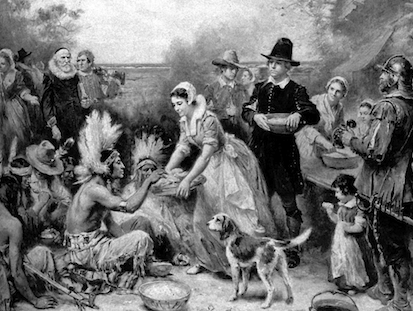 It’s November and Thanksgiving is upon us, so you’d expect to see some giving of thanks, right?

You see Christmas decorations, Santa hats, and Snowmen among all the other bits and trimmings common to the season, in stores waiting for customers to buy.

Television channels are already running Christmas advertisements, but it isn’t even December.

You should buy this gift for her; you should get this toy for the kids. Shouldn’t we be using the money to buy the Thanksgiving dinner instead of buying gift for a holiday that is more than a month away?

Then there is Black Friday. Black Friday is the day after Thanksgiving where many items in many stores have its price drop dramatic.

Some people start to wait at stores even before Thanksgiving ends. It’s like Thanksgiving is just shove aside right away so people can get stuff they really want.

Is it not popularizing enough because it isn’t able to be commercializing like Christmas and Halloween? Well if that is the case are we really celebrating holidays or just spending money?

It just seems that the media doesn’t really have anything Thanksgiving related on T.V. And if they do it’s barely anything compare to the other two holidays.

It’s not that people don’t celebrate the holiday, people still do, but it’s just that it doesn’t seem to stand out or be as commercialized as much as Christmas.

It seems that Christmas just took over November and Thanksgiving is just a lost day.

GENOVESI FAREWELL TO THE FAMOUS FIVE
MADDY ISN’T DREAMIN’ IT, SHE’S BEING IT! WITH ROCKY HORROR SHOWPLAY