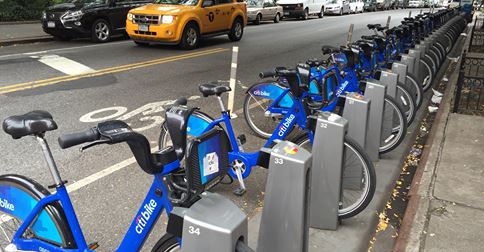 Since May 2013, Citi Bikes have allowed thousands of people to explore New York City via bicycle, but are these bikes beneficial to a bustling city or just an annoyance?

It’s no secret that New York City isn’t exactly the epitome of an ‘Eco-friendly environment’. This bike rental system was created with good intentions.

According to People for Bikes, “If 5% of New Yorkers commuting by private car or taxi switched to biking to work, they could save 150 million pounds of CO2 emissions per year, equivalent to the amount reduced by planting a forest 1.3 times the size of Manhattan.”

Aside from helping the environment, Citi Bikes also help our minds and bodies. Cycling is an excellent form of exercise, and exercise can relieve stress and anxiety.

According to the Better Health Channel, cycling is low impact exercise making it an easier way to lose weight and increase cardiovascular fitness.

The price of Citi Bikes is also unarguably cheap. They require a membership or a day or week pass and there are now 6,000 bikes and 330 bike stations located around Manhattan and Brooklyn.

It is $149 for an annual membership and if you use Citi Bikes daily, that’s just 41 cents a day. Compared to the $2.50 for a ride on the subway, that’s a great way to save on transportation. It’s also much cheaper than buying your own bicycle.

However, if you don’t feel like you can use the annual membership to it’s capacity, Citi Bikes also offers day or week passes. A 24-hour pass is just $9.95 and a weekly pass is $25.

That said, the downside of the rental system is that anyone can use it. New York City is not a great place to be getting on a bike for the first time. Unskilled and inexperienced bikers make the road a little bit more dangerous, and a lot of times these insecure cyclists are tourists.

What makes these tourists especially dangerous is that they don’t know the area or the rules of the road. Yes, we are lucky to have bike lanes throughout the city, but sometimes these lanes are blocked by pedestrians, parked cars and an unexpected litter which forces cyclists to swerve out of the way. This can get very tricky, especially if you’re new to biking, or new to the city.

Personally, what I find unsettling about Citi Bikes is that it’s very rare that someone is carrying a helmet with them. I recently witnessed a woman riding a Citi Bike without a helmet, brake very short on Atlantic Avenue. She was sent flying off the bike and onto the road.

The inconvenience of carrying a helmet throughout a day of work, school or exploring is enough for people to ignore the safety precaution. Thankfully the woman did not hit her head, but she did suffer major scratches and bruises on her chest and arms.

Whenever the topic of Citi Bikes stumbles into conversation it seems like most people roll their eyes or bring up an incident where an inexperienced cyclist on a Citi Bike nearly ran them over on the Brooklyn Bridge. However, maybe it’s not the bikes causing the problem, but the people riding them.

I truly believe that Citi Bikes could be extremely beneficial to this city if the right people are using them.

According to the New York Post, Citi Bikes is about to expand rapidly adding 12,000 new bikes and 700 docking stations. The expansion is said to be complete by 2017 and the new docking stations will be placed in the Upper East Side, Upper West Side, Harlem, Astoria, Long Island City, Williamsburg, and more.

Though, with this much expansion I can’t help but hope that this problem of insecure cyclists doesn’t worsen.