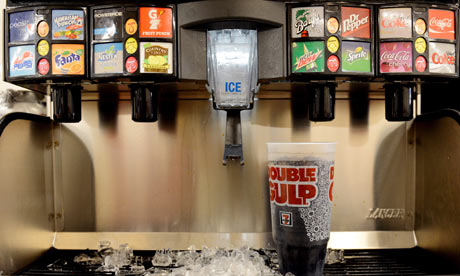 New York City’s Board of Health voted on Thursday to ban sugary drinks in containers larger than 16 ounces in restaurants and other venues in the city. New York City is the first in the country to put a ban like this into effect.

This decision by the Board of Health has brought up many controversial issues to us New Yorkers.

In six months from today New York City will be seeing sweetened beverages in whole new light and everybody is talking about it. However, the Board is ensuring that this policy will help the cities growing obesity epidemic. Will a can of soda really have enough influence to do just that?

According to CNN, “It’s time to face the facts: obesity is one of America’s most deadly problems, and sugary beverages are a leading cause of it,” said New York Mayor Michael Bloomberg “As the size of sugary drinks has grown, so have our waistlines — and so have diabetes and heart disease.” Bloomberg added that 58% of New York City adults are obese.

According to the American Diabetes Association, diabetes has increased 13 percent in NYC since 2002. However, as Americans can we solely put the blame on sugary sweetened beverages?

Sugary drinks have become a growing problem in this country. But as New Yorkers I think we have enough knowledge to decide whether or not we want to order a small or a large coke.

Hundreds of studies have been written on why we should cut sugary beverages from our diet and switch to water.

As an athlete, I am the first person to preach that water is the best thing for you. However, it is my choice to order a bottle of water at Chipotle instead of a refillable soda cup. It is your body what you decide to fuel it is your decision.

Many New Yorkers are comparing this ban to the NYC smoking ban in recreational parks just last year. But for me I think this is a completely different story.

On Saturday morning if I decide to go for a run in Central Park to get in my daily exercise that is my choice.

During that run two young boys decide to blow their cigarette smoke right in my path that I am running on- the boys decision to smoke is now not only influencing their life but mine as well. The second hand smoke affects my life as much as it reflects the boy’s decision to light up.

In comparison to the soda ban decision that is not the case at all. If you decide to get a 32 oz soda while I continue to drink my bottle of water that decision is influencing you and only you. As it has been proven in past studies that sugary beverages do no good for your body many could also argue the same fact with foods such as fries, potato chips and pizza.

The bottom line is when this ban goes into effect if you want to drink more than a 16 oz soda you will. It may cost you a few extra dollars but instead of buying one large soda people will buy two smaller ones.

The health of this country gets worse and worse as time progresses but it doesn’t change the rights we have in this country.

Bloomberg tweeted last night “6 months from today, our city will be an even healthier place.”

This is a very bold statement to make—lets see if the soda ban has the power to change the health of many Americans or if it just makes matters even worse.