OPINION: What happened to etiquette?

Home /Opinion/OPINION: What happened to etiquette? 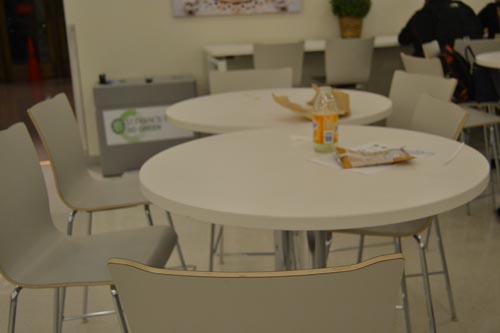 It was a crisp Friday afternoon. I was sitting in my religion class when my desk suddenly shifted. I grabbed the leg of the table to move it back where it was comfortable for me, but the event that followed was anything but comfortable.

The leg of the desk had warm, freshly chewed gum that I had misfortunately made contact with. I quickly reached for my hand sanitizer and applied a liberal amount to my contaminated fingers. I then looked underneath the table, and, to my disgust, saw a collage of multi-colored irregularly shaped objects.

There was gum everywhere. The saliva in this gum could be twenty years old, we will never know. Even so, the age is of little importance. What matters most is why the need to stick gum under a table exists.

“What is wrong with people?” was the immediate thought that followed. We are college students, adults. Most of us are in our twenties. We are enrolled in a post secondary institution of higher learning. Accordingly, I’m going to assume that the majority of students are aiming for a degree with the hopes of a stable career and good profession. So why is gum still being stuck underneath tables? It’s filthy, childish, and frankly disrespectful.

Since I’m on the topic, I will also speak of the brand new furniture installed in our cafeteria. Do you have ANY IDEA how much it cost to redecorate our cafeteria? I can assure you, it was a substantial amount. Yet, two days – that’s right two days – after the furniture was installed, the couches had questionable stains on them. There were plates full of leftover food stacked on one another, creating what looked like twelve inches of garbage on every other table. Wrappers were all over the floor. Bottles of Gatorade, water, and soda could be seen in every corner. I even saw a foot print on a chair. Again, what is wrong with people?!

People who litter degrade themselves while simultaneously creating a less hygienic environment for those around them. I REFUSE to believe that someone was raised to be a low class individual who has zero respect for the property of others, including the property of the school said individual attends. It’s disgusting. There are trashcans virtually on the corner of every hallway in St. Francis, and there are without doubt waste bins in every single classroom. Speaking of which, ever notice the little signs in front of every class room? Right before you walk in, on the side of the door? There’s always a sign prohibiting food and drink. This includes gum. The signs were placed there for a reason, and students are disobeying school rules. If it were up to me, students who litter should be fined and/or penalized, no questions asked. There is no justification for sticking gum under the table, or not cleaning up after oneself in general. Repulsive.

Not to mention, if students continue to destroy school property by sticking gum under tables, spilling food and drink, even putting their dirty shoes (that house bacteria from who knows where. A horse stable probably has fewer germs than the sole of your shoe. We’re in NYC after all, have you looked at the subway station platforms?!) on the lounge chairs and tables, then SFC will eventually have to replace furniture at a much quicker rate than initially anticipated. Do you know what these means? New furniture – and guess who’s paying for it. Chances are, the money will come from our tuition. The display of carelessness will lead to a hike in tuition rates. And if you attend SFC on scholarship or government aid, this does not exclude you. Don’t think because you’re not paying as much as others to be here, that you can break the rules and disregard the lifestyle of a civilized human. You are just as responsible for keeping our school beautiful, and beauty goes hand in hand with cleanliness.

We attend a private Catholic school; we have holy people dedicating their time here! Moreover, St. Francis College is highly ranked. I like to think that it’s an honor to be studying at SFC, and if you disagree, you could at least pretend that being here means something to you. Private schools carry a sense of refinement and sophistication, so why isn’t the entire student body at SFC exemplifying this? The fact that grown individuals exercise such animosity in a place as prestigious as SFC is beyond my comprehension. It’s sickening. Have you no shame? Please, if you are a participant of such behavior, do us ALL a favor and STOP. Innocent students such as myself, who are simply trying to earn a degree and move on with life, do not deserve to have their fingers make contact with a stranger’s saliva. Nor do we deserve to enter a lounge or cafeteria and have a mess surrounding us. It is the twenty first century; animals are domesticated, we have advanced technology, and plastic utensils have been developed for the sake of convenience. No one is asking you to wash dishes; the only thing that’s expected is to clean up after yourself. Let go of these barbaric habits; have some dignity and show courtesy to your community at SFC.