OPINION: BARACK FOR THE COLLEGE BALLOT 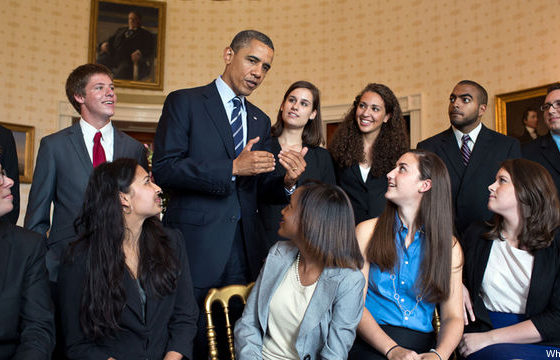 The 2012 Presidential Election is rapidly approaching and as young adults we could only hope that one candidate will benefit the average college student.

President Barack Obama and the Democratic Party have been approaching college students all over the United States to ensure that students understand the impact of their vote in this election.

When you look at all President Barack Obama and the Democratic Party has done to benefit college students so far, many will realize the need to choose Obama on the ballot this Election Day.

Mia Lentinello, a Junior and a Communications Major said, “I’m tired of listening to people complain about the president and his decisions. I’m going to get myself more informed on the candidates and make an educated decision on who I will be voting for.”

The majority of college students are regarded to have progressive and liberal political views. With that notion alone it is hard to even imagine how the Republican Party could benefit the students.

In Miami, on September 11, 2012, Former President Bill Clinton gave a speech to all college students and said the following “Starting in 2013 every student who borrows money under the federal student loan program, however much you borrow will be able to pay that loan back for up to 20 years for a small fixed percentage of your income,”. Clinton continued to say that he advocated increasing pell grants for low-income students.

This isn’t the first time Obama’s administration has made legislation that specifically helps the college student.

In 2010 Barack Obama got rid of the Federal Family Education Loan Program (FFELP) and replaced it with a direct lending version that 100% favors the student.

In the past students had to deal with private banks with interest rates of about 8.5% on loans. If a student needed more money borrowing became very difficult because the approval rate for their parents to get money was much stricter with credit checks. However, with the legislation that Barack Obama made in 2010 he changed the interest rate to about 7.9%.

Not only that but they also made the approval rate for parents seeking money increase and significantly expanded Pell grants, which help low-income students pay for college. Thus in the end helping students reach their dream of going to college.

James Chung a SFC Sophomore Physical Education Major said, ” Being a young college student I don’t see any sense voting for a president who thinks I should go to school up to what I can I afford. Student loans are important for students and creating an educated society.”

This fact alone influences the huge percentage of college students who borrow money to pay off school. President Obama essentially is making the dream of college that much more affordable by spreading the payment over a 20 year span.

However, this is not the only reason college students should vote for Obama.

The students who fly liberal flags high on campuses all over the country should be happy to know that Barack Obama has Promoted Social responsibility through the creation of serve.gov which is a national database of volunteer opportunities.

After college many students seek a job and find it very difficult to pay the bills on time but most of all have a hard time getting affordable health care. With Obama’s health care reform bill it allows children to remain covered by their parents insurance until the age of 26.

This gives the average college graduate approximately three years to get themselves on their feet before they have to fork over cash to big insurance companies just so they can get a yearly checkup.

Barack Obama has been progressive so far and hasn’t stopped yet. Recently he became the first President to fully endorse Gay Civil Rights and openly state that he feels Same Sex couples should have a right to wed.

Change is what this country needs. College students are the country’s immediate future. It is up to each of us to make the right decision this Election Day. Be sure to be politically educated and most of all rock the vote!

OPINION: THE DOG DAYS ARE OVER
REVIEW: 5 STARS FOR THE IPHONE 5