OBAMA STATE OF THE UNION ADDRESS, WITH OR WITHOUT CONGRESS

Home /News/OBAMA STATE OF THE UNION ADDRESS, WITH OR WITHOUT CONGRESS 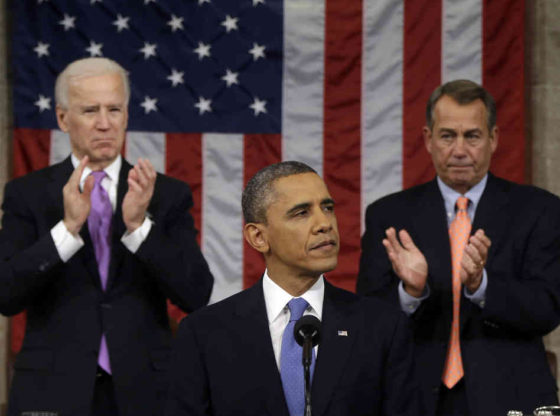 President Barack Obama, in his State of the Union address last night, told congress and the nation if opportunity can be expanded, without congressional legislation, he will go through with it when possible.

He said, “But America does not stand still, and neither will I. So wherever and whenever I can take steps without legislation to expand opportunity for more American families, that’s what I’m going to do.”

The President then added, “The question for everyone in this chamber, running through every decision we make this year, is whether we are going to help or hinder this progress.”

An argument, President Obama said, that has consumed this ‘town’ and if the country finds itself in a situation where it cannot carry out the basic functions of its democracy then, “We are not doing right by the American people.”

As his second term of presidency gets to its halfway point, President Obama used this opportunity to highlight all of the successes of this administration term as well as outline his tasks for the future.

In a speech that was defiant yet tactful, President Obama projected himself confidently, with little mention of the negative aspects of his past year in office, and told the nation he has a set of concrete plans to encourage economic growth and create more opportunity, from “Main Street to Wall Street,” some that require congressional actions from a deeply divided Republican House of Representatives and Democratic Senate.

President Obama’s State of the Union address comes at an important time to bolster American confidence and approval, with a 2013 characterized by, a government shut down over budget solutions, and the NSA privacy concerns.

The President chose not to lament on the issues of the past and instead focus on initiatives that would benefit the American people.

Despite the legislative deadlock in Congress, President Obama also spoke about movement that did not require congressional approval. The White House organized a College Opportunity Summit in which 150 universities, businesses, and nonprofits have made concrete commitments to reduce inequality in higher education access.

He then added, “They believe, and I believe, that here in America, our success should depend not on accident of birth but the strength of our work ethic and the scope of our dreams. That’s what drew our forebears here. It’s how the daughter of a factory worker is CEO of America’s largest automaker …how the son of a barkeeper is Speaker of the House…how the son of a single mom can be president of the greatest nation on Earth…Now …opportunity is who we are. And the defining project of our generation must be to restore that promise.”

With a glance back at John Boehner, who responded with a thumbs up to President Obama and the audience, the chamber erupted in a thunder of applause.

This approval opened up the floor for Obama to drop another crowd pleaser. He shifted the topic to women in the workforce and reiterated that today, women make up about half of our workforce, but still make 77 cents for every dollar a man earns.

“That is wrong, and in 2014, it’s an embarrassment…women deserve equal pay for equal work…It is time to do away with workplace policies that belong in a ‘Mad Men’ episode,” he said.

He also announced a new minimum wage plan upon his own accord. Until legislation is passed to raise the minimum wage, at least federal workers will benefit from a new minimum wage rate of $10.10. This is a raise for just new and renewed contracts, which will affect only several hundred thousand workers.

If Congress passes new legislation, it would affect 17 million Americans. Obama’s plan will be utilized in hopes that small and private businesses will follow suit and raise wages to compete.

For everything that occurred this year under his administration, his promises resonated deep within the chamber, and put forward a sense of progressive policy with use of his executive power. The President shows confidence that he will go it alone if Congress will not cooperate and offer bipartisan agreements.