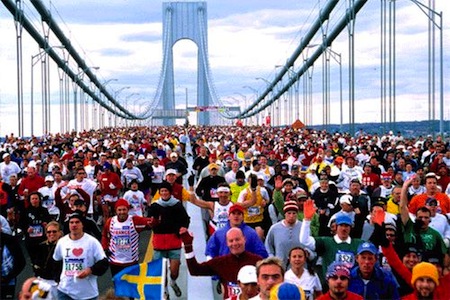 The 41st annual New York City Marathon will be held on Sunday, November 7, 2010. This 26.2-mile adventure is like no other marathon the world has ever seen.

The race is organized by New York Road Runners and in recent years has been sponsored by the financial company, ING.

Participants get to experience the beauty of New York City by running through all five boroughs (Staten Island, Brooklyn, Bronx, Manhattan, Queens). The race is always held the first Sunday in November. This marathon grabs the attention of 315 million viewers, watching from their homes, worldwide.

The New York City Marathon is the largest of all marathons in the world. The first race was in 1970 and out of 127 entrants only 55 crossed the finish line.

As a result of the great atmosphere that New York creates for its runners and spectators the marathon now has over 90,000 applicants every year. However, thousands of these runners never actually get the opportunity to run. The race application is limited at 38,000 competitors.

The most common way to obtain entry into the race is by running certain races and getting a qualifying time. However, this is not the only method. A more common way is to enter through a charity program that sponsors the New York City Marathon. However, if you have been denied entry for the past three years you are guaranteed entry on the fourth year.

Before runners begin the marathon they enter Fort Wadsworth in Staten Island. There to greet them are beverage stations, coffee, bagels and power bars before race time, and volunteers that direct them to the starting line.

The race begins on the Staten Island bound side of the Verrazano Bridge. The national anthem is sung and Frank Sinatra’s famous “New York, New York” is played to get runners in the spirit of the city.

The ING New York City Marathon is not something only the runners of New York enjoy. The marathon is known for its encouraging and exuberant spectators. Last year the race was estimated to have two million cheering fans. You don’t have to know someone to cheer on the largest running competition in the world. The streets of New York are filled with one hundred live bands throughout each mile.

The ING NYC Marathon is an event like no other and everyone should participate in the excitement. For those who aren’t runners, there are plenty of volunteer opportunities available, or you may simply just cheer from the sidewalk. It is most importantly, a day which each runner should be proud of and will be sure to remember for the rest of their lives.