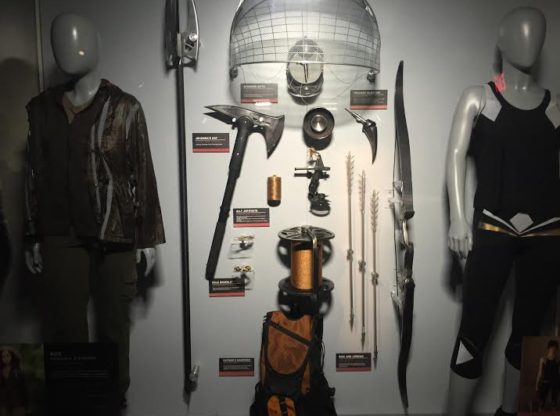 The exhibit of the the fantasy series The Hunger Games at Discovery Times Square takes fans on an adventure that mimics the films.

The series consists of three books and movies that are set in the Hunger Games Universe, where two young characters struggle to survive through a battle royal.

Before entering, guests have the option to use an iPod Touch as a tour guide for an extra $7, which lets them chose a favorite character to be the guide for the exhibit and includes deleted scenes from the films.

The first part of the exhibit takes place in Justice Hall, where a summarized explanation of the franchise is given. Then the gates of Justice Hall open and everyone is transported to their assigned district.

I was transported to District 12 — the same one the character Katniss is from.

The sets are arranged just like they are in the movies with props and costumes from the Hunger Games as well.

“I loved it. My sons are huge fans of the movies and books, it was a fun outing to take my kids,” a mother who was with her children told SFC Today.

After journeying through District 12, I ended up at the capital, where visitors can have a mock interview with the capital’s master of ceremonies Caesar Flickerman. All of the iconic moments from the Hunger Games are replayed in the capital section.

They even have the chariot that Peeta and Katniss rode through the capital in with all of their costumes. After seeing the vivid props of Peeta and Katniss’ achievements, guests get to look at a display of all the weapons used in the films — each of them has a video underneath stating how it was made and how it came to life in the film.

The exhibit ends with Katniss’ wedding dress and her raven dress from her interview with Caesar.

Walking out of the exhibit, visitors are given the option to get in front of a green screen and ride with Katniss and Peeta through the capital on their chariot.

“It was great. I had a great time,” a student visitor said. “I can’t wait till in a few years when they have all the props and costumes from every movie.”