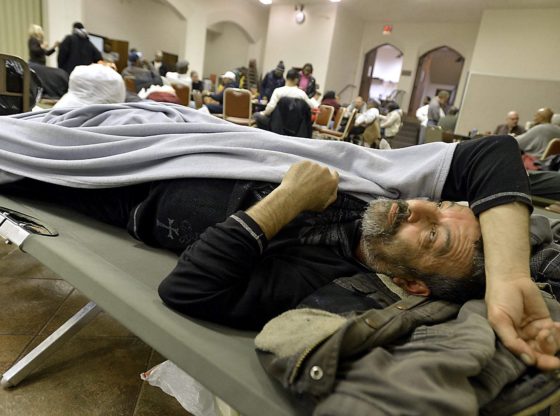 Homeless shelters across New York City have descended into dilapidated, nightmarishly violent abysses, whose occupants are subject to the specter of crime and, possibly, lead poisoning, the latter of which has prompted a federal investigation.

An analysis of the Department of Homeless Services (DHS) statistics by NY1 and The New York Daily News found that in 2015 city shelters, currently swollen with 58,000 inhabitants — a number so high the city has been forced to utilize hotels — suffered from 1,687 “critical incidents”, 826 of which were classified as violent.

All residents of shelters, as well as staff, live and work under the constant threat of violence, with beatings and stabbings constituting regular occurrences. Killings have made headlines in recent months, such as the stabbing and near decapitation of Devin Black, a former teacher at a homeless shelter in East Harlem.

But even more disturbing is the fact that 67 percent of these violent incidents occurred in family shelters and were usually manifest in child abuse and domestic violence. Sometimes these quarrels can turn deadly, as was the case last month when Rebecca Cutler, 26, was stabbed to death by her boyfriend Michael Sykes, 25, along with two of her children.

The prevalence of such familial trauma is no doubt compounded by the 12,232 families staying in shelters, a near-record that has placed immense strain upon the DHS.

It is these dangerous conditions that can make life on the streets seem preferable to shelters, despite entailing exposure to the elements.

“Shelters out here are not shelters – they’re sometimes worse than the streets,” Jeremiah Murphy, a resident of a homeless shelter in Queens said according to the Christian Science Monitor. “A lot of people don’t want to go to the shelter because they’ve got to worry about people stealing your stuff. People have knives and guns and stuff – and I’m supposed to feel some sort of safe haven?”

In response to this crisis, City Hall is taking action, with Mayor de Blasio announcing on Tuesday that the NYPD will retrain all DHS security personnel, and that a domestic violence program, discontinued in 2010, will be reintroduced to city shelters.

But high levels of crime and violence are not the only issues plaguing NYC homeless shelters. A report by New York City Comptroller Scott M. Stringer found that family shelters were rife with rodents, mold, broken windows, and peeling paint. Specifically, “53 percent of inspected apartments had evidence of rodents, roaches and other vermin”, while “87 percent of inspected units had conditions that raised health and safety concerns such as malfunctioning smoke detectors, blocked fire escapes, mold, mildew, peeling paint and walls with holes.”

All in all, of the more than 500 family shelters in New York, all but 60 of them were found to be suffering from some sort of “immediately hazardous problem”.

These are not the only trials and tribulations that the dozens of homeless shelters have to grapple with. As reported by The New York Times on Wednesday, federal prosecutors are investigating cases of elevated blood lead levels among occupants of public housing and homeless shelters and whether false claims regarding lead in apartments were filed by the New York City Housing Authority, so as to obtain funding from the federal government. Lead poisoning — to which children are particularly susceptible — can result in permanent damage to nerves, vital organs and the brain.

“I came here in February in one piece…”, a 31-year-old resident of a women’s shelter said according to the New York Daily News. “I don’t want to leave in a body bag.”

JOURNEY’S TOUR TO START WITH NYC APPEARANCE
THE CHINA STUDY: WELL-HIDDEN RESEARCH DEMONSTRATING THE RELATIONSHIP BETWEEN DISEASE AND THE FOODS WE EAT