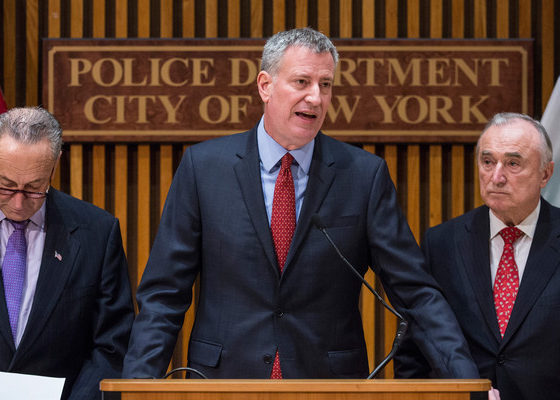 De Blasio responded to the proposed cut of $90 million by reminding federal officials how important anti-terrorism is to his city.

“New York City is one of the world’s top terror targets. . . . As a city and as a nation, we cannot afford to lose this essential funding,” the mayor said at a press conference at One Police Plaza.

In 2015, as part of the Urban Area Security Initiative, New York and other major cities were given $600 million to fund various local counter-terrorism measures. As per the proposed federal budget for 2016, however, that number has been reduced to $330 million, meaning the $190 million of that fund appropriated to New York is now in danger of being cut in half.

“New York City remains a top terror target,” Bratton said at the conference. “To cut funding — for a city that the entire federal government acknowledges is the top terror target — is indefensible.”

Specific counter-terror measures that would be affected, if not eliminated, by the cuts include security cameras, active-shooter NYPD drills, bomb-sniffing dogs, radiological and chemical sensors, the NYPD’s intelligence analyst program and FDNY terrorism response training.

“Who thought this would be a good idea?” Bratton asked everyone in attendance.

The mayor and police commissioner were joined in their criticism by Schumer, the senior senator from New York who has a lot of power in Washington.

Schumer stated that the proposed cut in anti-terror spending was particularly ill-timed in light of the recent terrorist attacks in Paris and the lone-wolf style shooting in San Bernardino.

“At the very time when our security concerns have increased because of ISIS and lone wolves…we’re cutting the funds,” the senator said. “and not by 10 percent, but by nearly 50 percent? It makes no sense.”

Schumer added that the cuts would not pass “on his watch.”

Other NY officials added their voices to the chorus of criticism, such as FDNY Commissioner Daniel Nigro and Long Island Republican Representative Peter King.

Perhaps as shocking as the cuts themselves, however, was the Whitehouse’s response to Senator Schumer.

When asked to reply to his critique, White House press secretary Josh Earnest let loose with a broadside seldom unleashed on any Democrat — let alone the man expected to become the next leader his party in the Senate.

“Senator Schumer’s credibility in talking about national security issues…have to be affected by the position that he’s taken on other issues,” Earnest said.

To the audible shock of reporters present, Earnest went on to blast Schumer even more.

“Schumer is somebody that came out and opposed the international agreement to prevent Iran from obtaining a nuclear weapon,” Earnest said. “He was wrong about that position…and when people look at the facts here when it comes to funding for homeland security, they’ll recognize that he’s wrong this time, too.”

The press secretary also claimed that the proposed $90 million of NYC anti-terror funding, despite being 50 percent less than what was allocated last year, would still represent “almost twice as much as New York officials have spent out of that account over the last two years combined.” Therefore, New Yorkers need not fear a tangible decline in counter-terror measures, according to Earnest.

However, such an argument is specious, because any money not yet spent has in fact been allocated, and will be spent in due course, according to Schumer.

In response to the White House’s comments, de Basio did not hold back in his defense of Schumer, and was shocked the White House would engage in such ad hominem.

“..to impugn Senator Schumer, who’s been an incredibly effective leader and clearly has been a powerful voice for protecting this city and this state nationally, I found that outrageous,” the mayor later said in an interview on the Brian Lehrer show.

Bratton took his comments one step further, saying the White House might be cutting NYC anti-terror funds in retaliation for Senator Schumer’s opposition to the president’s nuclear weapons deal with Iran.

“What the hell does the Iran deal have to do with this issue,” Bratton said…“What the White House has done is tip their hand — this might be political payback against Senator Schumer for a vote he made a while back [on the Iran nuclear weapons deal]. That should have nothing to do with the issue at hand, which is terrorism and the threat to this city.”