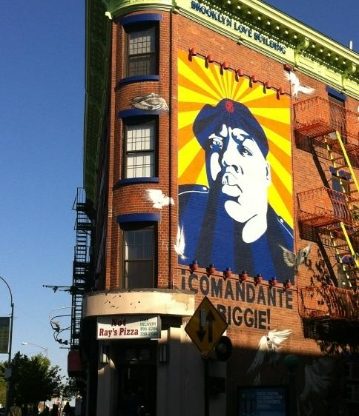 A campaign to co-name the corner of St. James Place and Fulton Street “Christopher Wallace Way” has been rejected by members of Brooklyn’s Community Board 2, which includes Clinton Hill, Fort Greene, parts of Bed-Stuy, Boerum Hill, downtown Brooklyn and Brooklyn Heights.

CB2 is opposing the campaign because of the late rapper’s criminal history, controversial song lyrics, and weight.

Christopher Wallace was born and raised by his single mother in Clinton Hill, Brooklyn. Wallace, best known as the Notorious B.I.G. or Biggie Smalls, was an icon of the Brooklyn hip hop by the age of 22, and was killed at the age of 25 in a drive-by shooting in Los Angeles.

Although B.I.G’s cultural significance in Brooklyn and beyond is undeniable, Community board member Lucy Koteen cannot “see how this guy was a role model.”  The neighborhood of Fort Greene already pays homage to Notorious in a big way. In the heart of the neighborhood, Sean Meenan, owner of popular establishment Habana Outpost, commissioned a large mural of a Che Guevara-esque Wallace, emblazoned with the words iComandante Biggie! in 2011. Little opposition has been shown by the neighborhood.

Koteen said, “He started selling drugs at 12, he was a school drop out at 17, he was arrested for drugs and weapons charge, he was arrested for parole violations, he was arrested in North Carolina for crack cocaine, in 1996 he was again arrested for assault, he had a violent death and physically the man is not exactly a role model for youth. I don’t see how this guy was a role model and frankly it offends me,” in a report by DNAinfo.
CB2 may be against the “Christopher Wallace Way” campaign, but LeRoy McCarthy who put forth the proposal has gained support from over 3,500 people who signed his petition, a local block association, two nearby churches, a mosque, and several local businesses.

McCarthy told the Village Voice, “You can’t hold how somebody died against him, the way somebody looked, you can’t hold that against them either – President [William Howard] Taft was very fat.”

Regarding Biggie’s lyrics, McCarthy said, “Shakespeare [also] had off-color language at his time, but he was an artist sharing a story in language that might not feel comfortable to [all] people in the community.”

Since she has been in the midst of campaigning, a decision on “Christopher Wallace Way” will just have to wait.