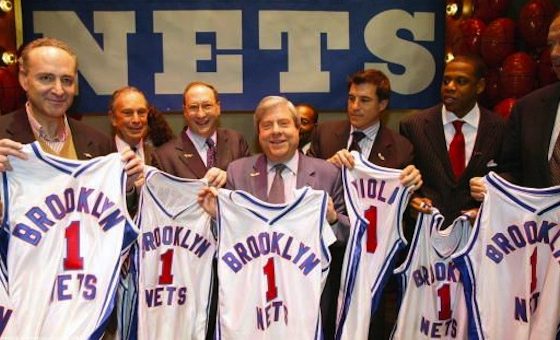 In 2004, after failing to secure a deal for a new arena in Newark, New Jersey, YankeeNets sold the franchise to a group headed by real estate developer Bruce Ratner for $300 million- beating out a group led by Charles Kushner and Jon Corzine.

While Kushner and Corzine wanted to keep the Nets in New Jersey, Ratner planned to move the team back to New York. In 2005, the Nets announced plans to place the team in the Prospect Heights neighborhood of Brooklyn.

One of the stakeholders in the team is rap mogul and Brooklyn native Jay-Z. The team would be renamed “Brooklyn Nets”, “New York Nets,” or have a new name attached to its Brooklyn location.

The Barclays Center is in the middle of an extensive redevelopment project called the Atlantic Yards; it is being built by Ratner’s real estate development company. The site of the arena is within proximity of the site Walter O’Malley wanted to use for a new Brooklyn Dodger’s stadium in the early 1950s. O’Malley’s plan was rejected and resulted in the team’s relocation to Los Angeles in 1958. The Nets would be the first major professional sports team to play their games in Brooklyn since the departure of the Dodgers. Currently, the arena is in the final planning stages.

The Nets originally planned to move across the Hudson River for the beginning of the 2009-2010 season. However, on January 3, 2008, the team announced that it would not start to play at the Barclays Center until 2010 at the earliest. In September 2006, the team and the New Jersey Sports and Exposition Authority announced an extension of their lease to keep the team in the Meadowlands until 2013 with a provision to leave as early as 2009 if the Brooklyn arena is completed. In December 2008, construction on the Brooklyn Atlantic Yards project, which would include the Nets’ $950 million Barclays Center, was scheduled to go forward, according to a Forest City Enterprises executive.

Forest City chief executive, Charles Ratner, said the developers could afford to delay construction of the project in 2009 if the economy continued to struggle. If the Nets achieve the goal of a 2011 move to Brooklyn, arena construction would have to start sometime in the spring of 2009, assuming a court battle over environmental review of the site has concluded.

According to the Net’s chief executive, Brett Yormark, in an interview with Bloomberg Television, the Nets are committed to moving to the Barclays Center in Brooklyn for the 2011-2012 NBA season, overcoming economic concerns and legal opposition.

As of May 16, 2009 the court ruled in favor of Ratner. The groundbreaking was scheduled to begin in October for the Barclays Center, but the opposition still plans to appeal the ruling. There is a scheduled court hearing for mid October 2009 in regards to Forest City Ratner’s use of Eminent Domain. As evidenced by arena designs released on September 9, 2009, the project has drastically changed and the opposition says it’s effectively no longer the project that was originally approved by NYC.

Yormark said in an interview that if groundbreaking did not begin by December 31, 2009 the entire project will be cancelled. In a recent interview with David Letterman, Net’s stakeholder Jay-Z said that if legal hurdles were defeated, groundbreaking would start around “early December”.

On September 23, 2009, Russian businessman Mikhail Prokhorov agreed to a $200 million deal to become a principal owner of the Nets and a key investor in the team’s proposed new home in Brooklyn. The deal is contingent on Ratner obtaining finance for the arena project and control of all the land required by the end of 2009 as well as approval by the NBA.

There was speculation that the Nets may move to Newark if the Atlantic Yards deal falls apart. In October 2009, the Nets played two pre-season games at the Prudential Center. While the two pre-season games were successful, a deal that would have the Nets play at the Prudential Center for the 2010-2012 NBA seasons reportedly fell apart; NJSEA refused to release the Nets from their lease at Izod without penalties.

The negotiations eventually resumed and on February 18, 2010, the Nets finalized a deal that would move them to the Prudential Center in Newark until the Barclays Center in Brooklyn opens.

After the dismissal of major pending lawsuits, groundbreaking for Barclays Center finally began on March 11, 2010. For the NBA 2011 season, the Nets will just be a bus or train stop away for us Brooklyn natives.

IVERSON NEEDS SOMEONE TO LEAN ON
THIRD SLIME’S THE CHARM