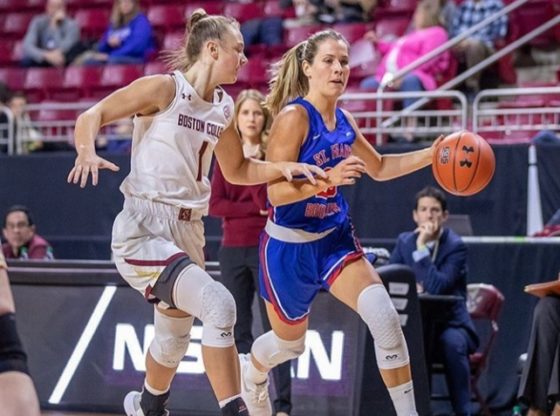 Maria Fux led the NJIT Highlanders to their first win for the season in a 69-88 victory over the St. Francis College Brooklyn Women’s Basketball earlier this evening.

Starting off early, the Terriers took the lead as they recorded the first four points of the contest. However, this would be their only lead of the contest as the Highlanders mercilessly ran through the Terriers on a 21-8 run giving them a safe 11-point lead in the first quarter. The first quarter ended and so the second began as the Highlanders continued their attack. The Terriers in attempts to comeback went on an 8-0 run but this was not enough. They trailed 36-53 at halftime.

In the third and fourth quarters, the Terriers managed to score a total of 33 points however the Highlanders stayed focused and played their game to finish with a win the contest; their first for the season.

Fux led her team with a high of 19 points. She rebounded four balls and assisted in three baskets.

Tunstall recorded her third double-double of the season with 16 points and 10 rebounds. She also recorded five blocks.

Bajic recorded her first double-double for the season with 11 points and 11 rebounds. She assisted in four baskets, recorded two blocks and one steal.

Dimitrijevic, recently making history in the Terriers program by being named NEC player and rookie of the week, had a good run this evening as she recorded her first NCAA DI double-double with 13 points and 12 assists. She also grabbed three rebounds and recorded five steals.

Johnson finished with 13 points and three rebounds. She recorded two steals and landed six of seven shots at the free-throw line. Yet again, Johnson was named an NEC prime performer of week three.

The Terriers return home as they will host the Princeton Tigers on Sunday, December 1, at the Jaddwin Gymnasium, NJ. Game tips off at 1 p.m.