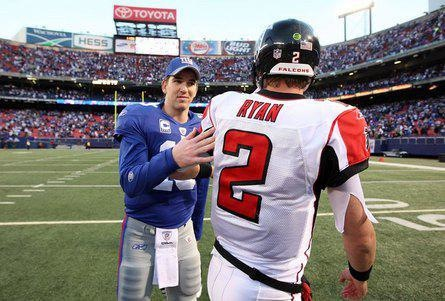 The New York Giants (#4 seed) will host the Atlanta Falcons (#5 seed) at the new MetLife Stadium in the first round of the NFL Playoffs on Sunday at 1:00pm.

New York started the season with a 6-2 record before suffering a four-game losing streak.

The Giants, however, rebounded and went 3-1 over their final four games of the season and won the NFC East division by beating their rival Dallas Cowboys 31-14 at home last Sunday night.

Atlanta, meanwhile, finished the year 10-6 and is back in the playoffs for the second straight year (1st back-to-back playoff appearances in franchise history) after demolishing the visiting Tampa Bay Buccaneers 41-24 on New Year’s Day.

Ryan is hoping his good play will translate into the playoffs because he is winless (0-2) thus far in his post-season career.

The Falcons were the No. 1 seed last season but lost at home to the eventual Super Bowl Champion Green Bay Packers in the second round of the playoffs. Atlanta also fell to the Arizona Cardinals in 2008 – the first season Ryan and Head Coach Mike Smith joined the team.

“I know we’ve had two postseason games prior to this,” Smith said. “We haven’t gotten the outcome we’ve wanted. We are learning from those experiences. We’re going to use those as growing experiences and we’re looking forward to competing this week, and that’s not just Matt Ryan.”

“All the stuff that happened in the past doesn’t really make a difference,” Ryan said. “It comes down to preparing this week and doing whatever we can to keep advancing throughout the playoffs.”

New York’s confidence is high as they believe their team is gelling at the perfect time just before the playoffs.

Giants’ 6’4” 260lb running back Brandon Jacobs strongly stated: “I would not want to face the New York Giants in the playoffs right now.”

One reason to trust the bruising back is because of the stellar fourth-quarter play quarterback Eli Manning is producing.

Manning set an NFL record with 15 fourth-quarter touchdown passes as well as compiling a fourth-quarter passer rating of 110.0 which was second best in the NFL while leading the Giants to five comeback victories when trailing in the final quarter.

“Something coach (Tom) Coughlin has stressed all year and has kind of been one of our mottos or one of the things that he’s talked about throughout the year is finishing the fourth quarter — finishing games and ending games and taking advantage of finishing the season strong,” Manning said.

Manning for the entire season has thrown 16 interceptions compared to 29 touchdowns (tied with Matt Ryan) along with 4,933 passing yards with a 92.9 passer rating.

The newly acquired high-flying passing attack for New York is mostly credited to the emergence of second-year receiver Victor Cruz who has 82 receptions on the year for 1,536 yards and nine touchdowns.

Cruz’s counterpart Hakeem Nicks assisted in the passing game by hauling in 76 receptions for 1,196 and seven touchdowns.

“They are very explosive and that is the thing that is evident if you look at the plays,” the Falcon Coach said. “They have had 71 plays of 20 yards or more this season so they are a top-10 team in terms of creating those plays.”

Although Manning and his two prolific receivers rank as the league’s fifth best passing offense, the Giants rushing attack is ranked dead last in the league (32th) averaging just 89.2 yards per game.

The Falcons passing offense meanwhile is ranked eighth best in the league due to their own duo of dynamic receivers Roddy White and Julio Jones – not to mention the best tight end in NFL history and future Hall-of-Famer Tony Gonzalez.

Atlanta’s rushing attack on the other hand is the 17th best in the NFL averaging 114.6 yards per game thanks to running back Michal “The Burner” Turner.

“He is a load for one [person to tackle] and he does a good job running behind his pads,” said Giants linebacker Michael Boley who played for Atlanta from ’05-’08.

Turner finished the season as the third best running back in the NFL as he rushed for 1,340 yards and 11 touchdowns.

The key match-up to watch in the game will be the Giants defensive line that has been wreaking havoc against opposing quarterbacks, racking up 11 sacks in their last two games, versus Atlanta’s offensive line that has allowed the 2nd-fewest sacks (8) in the league since Week 9 .

New York’s defensive line has recorded 48 total sacks this year, which ranks third in the NFL and is anchored by second-year pro-bowler Jason Pierre-Paul who leads the team with 16.5 sacks.

The Falcons will want to utilize their run game if they want to win and should give their star running back a heavy workload as Atlanta is 9-1 on the year when Turner has 19+ carries in a game.

This is going to be very evenly matched game, but a slight edge goes to the Giants because of their home-field advantage. Otherwise, these teams are basically mirror images of one another.

Atlanta’s last playoff win was in 2004 against the St. Louis Rams.

New York’s last playoff win was against the New England Patriots in Super Bowl XLII when New England was an unprecedented 18-0 on the verge of making history.

The Giants became champions after winning all four playoff games on the road in 2007. Eli Manning has never won a home playoff game.

Matt Ryan has not even won a playoff game.