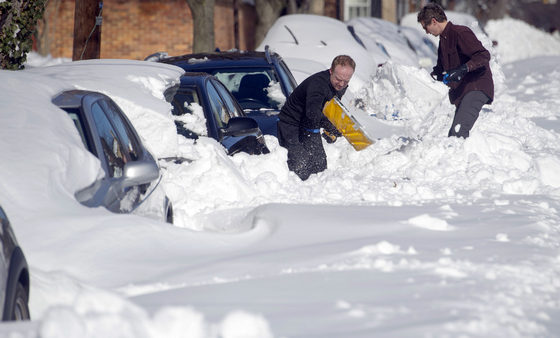 MTA transportation was suspended including buses, subways and the Long Island Railroad. Governor Andrew Cuomo also issued a travel ban on all roads in the five boroughs and Long Island.

The ban was lifted at 7 am on Sunday, but may of the MTA’s subway and train lines were took a while to return. The LIRR was still running with partial service Monday.

Some boroughs were hit harder than others, leaving their roads impossible to travel through.

Mayor Bill de Blasio declared Queens as the borough that needed the most man power of snowplows.

“Queens is a big borough,” the mayor said according to PIX11.

The mayor promised that city workers would clean the streets of Queens with 850 plows.

The storm did not only leave a huge pile of snow, but also caused at least 30 deaths nationwide, according to the Associated Press.

Residents didn’t let the historical blizzard stop their fun. As a matter of fact, some faced the cold embrace of the storm by using skis to take on the city. YouTuber Casey Neistat posted a video of himself and a friend snowboarding and skiing down the street in Manhattan.

The video had 2.5 million views within seven hours and was featured on local news channels such as ABC 7 and CBS New York.

Famous photographer Brandon Stanton — creator of Humans of New York — captured photos of children building and laughing in the snow. One photo showed two young boys cheerfully playing. The caption read: “We’re kinda trying to make an igloo but we’re not sure how to make the roof.”

Though the storm left New York City with a handful of issues, residents continued to venture the concrete jungle with an optimistic outlook for the days ahead.