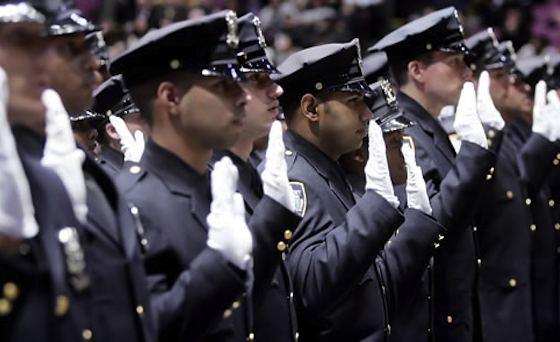 WRITTEN BY EDWARD ALI ON

April 1 — The New York Police Force has decided it has too many Catholics and will impose a five-year ban on hiring any more from January 1, 2011 through January 1, 2016.

The police force believes that New York City citizens will feel more relaxed if they see officers of all religions.
“We want to show that we are more diverse,” said police chief Gerald Fitzpatrick of the March 17 Precinct in Manhattan.

“If New Yorkers see that we have officers of Islamic, Jewish and other faiths — we’ll even take Protestants — they will feel as though they can relate to them.

“This can also lower the crime rate, in that citizens will see that one of their own is on the force protecting people.”

Fitzpatrick said the force will go to great lengths to make sure the strict new regulations are enforced.

“When we look at the new students in our police academies, we will not hire anyone with any name that sounds remotely Irish or Italian or Polish. If we even see an individual with a last name like McSherry or Romano or Krzeszowski, they will be already disqualified for the job,” said Fitzpatrick.

“I don’t see this as being discriminatory to the Italian, Irish or Polish communities. Instead I see it as giving people of different religions a better chance to serve and protect in New York City. We just have too many Vinnies and Paddies on the force.”

Police Force public relations manager April McFool agreed: “I hate to admit it, but we have to throw the Protestants a bone. They don’t have much going for them, with their limited education and serious lack of good looks, so maybe a career in the police force could give them the leg up they need. It’s the Christian thing to do. Protestants are Christians, right?”

A recent graduate of the New York Police Force Academy, Daniel Goldberg, said: “I don’t want to be treated as a charity case. I want to be in the police force for my talent and commitment. Not because I’m Jewish. I’m highly offended by the whole thing really.”

When officer Vincent Russo (Italian-American) was asked on his views of the new regulations taking place in 2011, Russo stated: “I personally feel it’s ridiculous. It shouldn’t matter what religion you belong to, just as long as you can do your job right. Whenever I’m called to duty, I never had a victim tell me that they didn’t want an Italian to handle their case. People just don’t care just as long as you can protect them.”