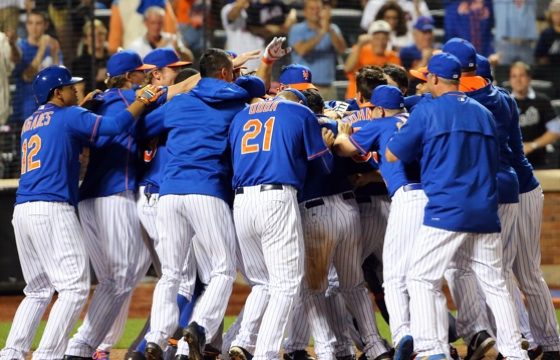 It’s been a long time.

No, not the home-run apple that’s already residing in Citi Field, but the city once known as a baseball town looks to be heading back in that direction.

And this time, let’s just say that we’re a few pinstripes short.

Not to knock the New York Yankees and their devoted fan base, but everyone knows this isn’t about them.

This wasn’t their year, and quite frankly, this isn’t their time. The Mets are in their first World Series since losing to those Yankees fifteen years ago.

They’ve finally returned to the World Series, and have retaken the big city as their own.

Mets second baseman Daniel Murphy at this moment has seven home-runs during the playoffs, a franchise record.

However it ends, 2015 will be remembered as the year of the Mets.

We’ve witnessed the organization’s first 90-win season since 2006, which was the last great year in their 50-plus year history. In an event most did not see coming, the Mets won their first National League East division win since 2006. This led to their first NL playoff appearance.

Now after sweeping the Chicago Cubs in a four-game series, their victory will mark their first World Series appearance since 2000. Starting with 2006, the Mets had a solid three-year run.

In both 2007 and 2008 they memorably choked away opportunities to get back into the postseason, and have been a haunted franchise ever since.

I sincerely believe however that 2015 is different.

This team is special, and everyone knew that something had been brewing, but not many suspected that it would rise to this level. Before last season, Mets General Manager Sandy Alderson proclaimed that his boys could become a 90-win team before the 2014 campaign teed off.

But as we can tell, Harvey’s return was worth the wait because everything began to come together as the 2015 season got going.

The magic of the Mets all began when they won 11-straight games after a 2-3 start. However, we quickly learned what we already knew about this team; they could not hit and their line-up was awful at times.

And I’m talking John Mayberry Jr, Kirk Nieuwenheis, and Eric Campbell in the middle of your line-up — awful.

As the Mets cooled off and coasted along for the rest of the spring, they found themselves back around .500 (36-37) after a seven-game losing streak that ran from mid to late June.

Right before the All-Star break, the Mets improved to 47-42 showing clear signs of life as they remained within striking distance of the NL East first place Washington Nationals who were 48-39.

It was clear that the team was finally ready to seriously compete and Alderson orchestrated the moves he thought would get them over the hump.

And as we can tell, they certainly did.

We saw the Mets acquire third basemen Juan Uribe, and Kelly Johnson from the Atlanta Braves to help fill the void left by injured captain David Wright one week before the trade deadline. In response to their bullpen troubles, Tyler Clippard arrived in from the Oakland A’s just days after, and Addison Reed later came aboard from the Arizona Diamondbacks.

But the turning point came within the last few days of July when the tears of shortstop Wilmer Flores became a national sensation.

Flores was “traded” in a deal that would’ve had the Mets acquire Milwaukee Brewers dynamic outfielder Carlos Gomez.

Clearly disoriented from the news, Flores began to openly sob while playing his position in a standard regular league game against the San Diego Padres.

With the trade complete, or so we thought, Flores finished the game which led to more questions than answers. But of course, in what some would call typical Met fashion, the deal fell through. Flores did however cap off a week for the ages by hitting a walk-off home run against the Nationals two days after the “deal.”

In spite of his heroics, a big bat was not to be had.

Or so it seemed…

The fortune of the Flushing based franchise changed when the Mets acquired Detroit Tigers outfielder Yoenis Cespedes hours before the trade deadline on the 31st.

Once Cespedes arrived and the Mets swept the Nationals to regain first place, they never looked back.

Cespedes had a far bigger impact on this team that anyone imagined, and to put this into perspective, he may be the best mid-season acquisition in years.

Not for the Mets because that’s a given; I’m talking about all of major league baseball. After playing 102 games and recording 427 at bats for the Tigers, Cespedes ended his Motown stint with 18 home runs, 61 runs batted in, and a .293 batting average.

In comparison to only 249 at bats in 57 games, where he blasted 17 home runs, accumulated 44 runs batted in, and hit .287, Cespedes clearly left a much larger impression in Queens.

From the moment they acquired Cespedes, the Mets finished with a record of 38-22 to close out the regular season. Whether or not the free agent will remain in a Met uniform beyond 2015, the Mets are primed for a promising future.

This season isn’t believed to be a one-year wonder because the groundwork has been laid long ago for potentail sustainable success.

When Alderson arrived in New York to guide the Mets back into the postseason in 2010, everyone knew Rome wouldn’t be built in one day.

More importantly, we also knew that the team had financial limitations because of the Bernie Madoff Ponzi scheme ordeal and how it directly affected Mets ownership, namely majority owner Fred Wilpon. The Mets had needed big bats and arms for quite some time, but Alderson and ownership would not make a run at many if any for years.

Instead the Mets made some deals, stockpiled on pitching, and Queens, New York may now be home of the best rotation in all of baseball.

While the Alderson regime did not draft Steven Matz in 2009, or Matt Harvey and Jacob DeGrom in 2010, they did oversee the rise of these young phenoms. Additionally, the Mets executed a brilliant trade in 2012 that assisted in their current setup.

In December of 2012, the Mets dealt that season’s Cy Young award winner R.A. Dickey to the Toronto Blue Jays. Dickey played in over his head and raised his trade value to an all-time high.

Along with Dickey, the Mets also dealt catchers Josh Thole, and Mike Nickeas, neither of whom have done anything since the blockbuster transaction.

The deal turned robbery has paid dividends for the Mets as evident by d’Arnaud’s and Syndergaard’s emergence into two rising young stars. Syndergaard especially, who out pitched 2015 Cy Young favorite Jake Arrieta in game 2 of the NLCS.

Another trade during the Alderson era took place nearly one and a half year prior to robbing the Blue Jays of two of their best young prospects.

Days before the trade deadline in 2011, the Mets sent longtime outfielder Carlos Beltran to the San Francisco Giants. Giving up a player with the stature of Beltran wouldn’t come at a low fee, and the Amazin’s managed to pry away 2009 sixth overall pick, Zack Wheeler from the Giants.

Currently on the shelf due to Tommy John surgery, Wheeler is expected to be ready for 2016 and resume his promising young career.

Wheeler, 18-16, 3.50 ERA in 49 career starts, could likely become the fifth starter in a 2016 rotation that would include DeGrom, Harvey, Syndergaard, and Matz.

So in essence, this little feel good story is far from over.

Whether or not the Mets become World Series champions, this city should be proud of the orange and blue, and what they’ve accomplished.

The Mets will be playing against the Kansas City Royals in the 2015 World Series.