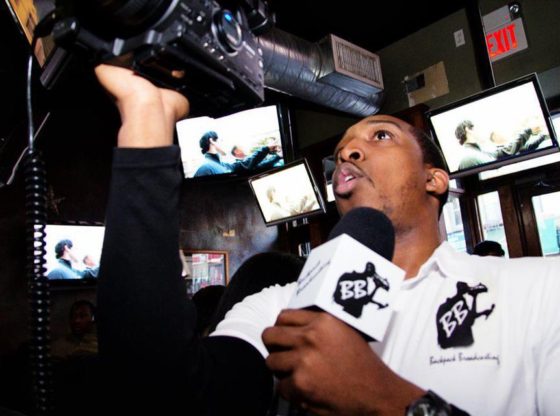 Henry has enjoyed his time at St. Francis Brooklyn. He said, “My time working at SFBK has been great. It has truly been a pleasure to help young men and women learn about the world of broadcast journalism. It’s also amazing to produce the great live broadcasts we do and work with our great student athletes and Athletic staff.”

At St. Francis Brooklyn, he is the executive producer of athletic events shown on NEC Front Row. Henry also produces student run programs such as Terrier Nation and teaches students how to film games and interviews.

The interaction with students is Henry’s favorite part of the job.

“Dexter really is great at what he does. I have learned so much from him in the past year. He really knows how to prepare us for the real world. He’s really a great mentor,” said senior Maria Fraschilla.

Henry, who graduated Pittsburgh University in 05′, has a great deal of experience in video journalism. He has written for the Brooklyn View, New York SportsScene Magazine, the Canarsie Courier, NYCHoops.net and RedStormReport.com.

Henry has filmed and reported for CineSport.com, CBSSports.com,Giants.com, ESPN Deportes, the New York Post.com, and the New York Daily News.

Currently Henry is working as a video reporter for SB Nation, Nets Daily, and freelance videographer for Street Smart Video.

He also runs his own company called Backpack Broadcasting where he covers local professional and high school sports.

This semester Henry will continue use his experience to teach SFBK students what they need to receive a job in broadcast journalism. He also looks forward to the new features that will be on the live games for NEC Front Row.

“This semester I am looking forward to just us getting better with our new setup using the Tri-Caster system. We now live-stream in High Definition so that is exciting!”