NEVER BELIEVE IT’S NOT SO

Home /Entertainment/NEVER BELIEVE IT’S NOT SO 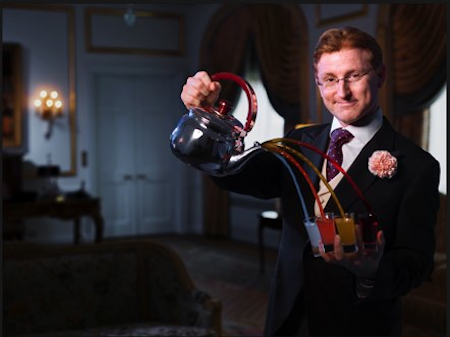 Ladies and gentlemen, “Chamber Magic” is a show like nothing you have ever seen before.

Steve Cohen is a man who has distinguished himself in the art of magic and mind reading, far beyond the realms of your average commercial magicians.

Cohen studied at Cornell University and earned a degree in psychology. Today, he lives in Manhattan with his wife and two children, both of whom he instructs in the ways of magic daily. Cohen has been performing magic since he was a young boy, and wishes to keep the tradition of magic within the family. His grandfather had taught him as a child and from then on he knew it was his calling.

Cohen performs his show “Chamber Magic” at the famous Waldorf-Astoria Hotel, on Park Avenue, on Friday and Saturday nights in a private suite with a limited amount of guests. He has five shows every weekend he is in town, two on Friday and three on Saturday, and tickets range from seventy five to one hundred dollars. Cohen wants every person in the audience to be involved in the magic of the show and experience it “up-close”.

Once a month Mr. Cohen holds another show called “Miracles at Midnight.” This show includes tricks from “Chamber Magic” as well as many tricks he only uses at private events. “Miracles at Midnight” is limited to twenty audience members and the tickets are $250.00 each.

Cohen likes to recreate the intimacy of 19th century parlor performances by including a dress code for his show. Both men and women must be dressed in formal attire. The appearance of the audience adds to the grand atmosphere of the show.

Cohen is constantly travelling and performing shows all over the world. He has performed for many public figures and celebrities, such as Michael Bloomberg, Martha Stewart and Woody Allen, and continues to perform for some of the richest people in the world.

Before you go, be prepared for a show like no other; your mind will be read, tricked and ultimately mesmerized by card tricks, a ring game, and a “think a drink trick”. The best part of the performance is that every person in the audience becomes involved in the show.

Cohen makes it known that the audience members are participating in half of the work, which makes the evening even more astonishing. After the show he is willing to speak with his guests and answer any questions they may have, except for the frequently asked question of: “how did you do that?”

The show is incredible and it comes highly recommend. Be sure to visit chambermagic.com to check out the five star reviews. You can also purchase tickets on the website. Keep in mind that the shows fill up fast, so be sure to purchase tickets soon.

In this big city anything is possible though magic usually is not in our cards, but for one night it most certainly can be.