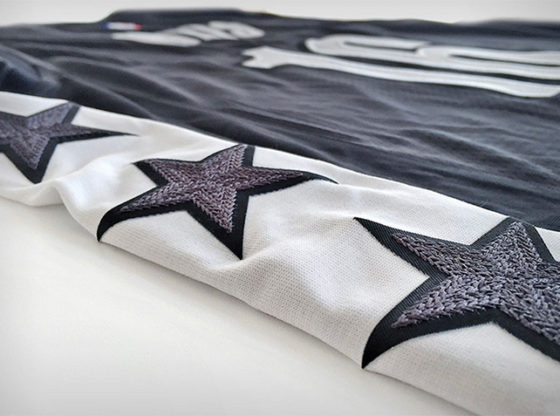 The Brooklyn Nets are bringing a new style to the court this year.

Fans of the Nets will see the debut of the “Brooklyn Remix” uniform at the start of the 2016-2017 NBA season.

The team will wear a uniform that pays homage to both the New Jersey Nets’ 1984-1990 uniform and the Brooklyn Nets’ current uniform between October 28 and March 30.

“The Brooklyn Remix uniforms represent a fusion of the past and the present,” Brooklyn Sports and Entertainment CEO Brett Yormark said in a statement.

The uniform – a collaboration with Adidas — will combine elements and color schemes reminiscent of both the Brooklyn and New Jersey uniforms.

The black jerseys will feature the word “Nets” across the chest and “Brooklyn” down the left side, a design reminiscent of the old-fashioned NJ uniform.

“By combining elements from the team’s most iconic uniforms, we’ve created a modernized look that emphasizes and defines today’s lifestyle brand,” Yormark added.

The Nets will debut the remix uniform during their home opener against the Indiana Pacers on October 28. They will wear them at three home games and eight away games during the rest of the season.

Young has since been drafted to the Pacers and rumors are speculating about Lopez being traded to the Chicago Bulls just days before the start of preseason.

The Nets will host the Detroit Pistons Thursday at Barclays Center for their first preseason game. The two teams will tip off at 7:30 pm.