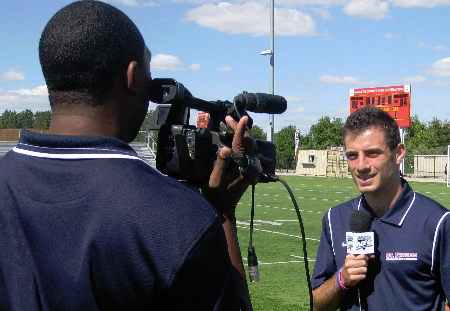 NEC Front Row will be a web-site that will host live streaming of games, video highlight packages and player interviews.

SFC has hired Dexter Henry as the department’s New Media Coordinator to lead the NEC Front Row initiative. Henry has an extensive background in communications, dealing with video production and producing online content.

NEC Front Row was created by the heads of all the NEC schools with the idea to expand coverage of the conference.

SFC Director of Athletic Communications David Gansell had the task of hiring Henry from a long list of qualified candidates. With each NEC school having to hire a video coordinator, Gansell felt Henry was the right person for the position.

Gansell said, “I felt his versatility, connections and his background were perfect for what we were looking for.”

The response to this program has been overwhelming. Many students have offered to join the program and have expressed a great interest in dealing with video production. In fact, a club is already in the works for athletic communications.

Henry was excited to see so many students interested in working with him.

“To see the continued interest from the students is comforting and rewarding,” Henry said. “I feel that we will see their enthusiasm and passion shine through the work that they do.”

Junior Maria Fraschilla, who is one of the members of the program, is very eager to get started.

Fraschilla said, “Since SFC doesn’t have many sports related classes, it gives students the chance to shoot, edit and produce videos. It could benefit all students who want to get involved.”

The athletics web-site has covered the schools teams over the years but with the launch of NEC Front Row, Gansell feels coverage can go to the next level and really take off.

Gansell said, “It gives us a chance to increase our coverage because we will finally have the necessary manpower to get our athletes the coverage they deserve.”

Gansell and his assistant, Brian Morales, have moved from the fourth floor athletic office to the second floor office above the Dan Lynch Gymnasium.

This will be the place where the students will have access to the video equipment, computers and other neccessary components. Students will be able to work with this equipment first-hand and gain valuable experience.

“I think our alumni and fans are going to be extremely impressed with the amount of high-level content that our office is going to produce on a weekly basis,” Gansell said. “Our goal is to keep the web-site as fresh as we possibly can so that people want to come back for more. We also want to promote the great things that are student-athletes are doing both in and out of competition.”

Henry and Gansell have many goals that they would like to accomplish with this program, but they both have one main ideal – to have the best multimedia coverage in the NEC.
Henry said, “While the students and I want to produce a great deal of content for the program, I want to have the best quality coverage in the NEC. I want the students to be proud of the work that they do.”

Social media will be vital to this web-site as well. Twitter, Facebook and Instagram have really changed the way journalists cover sports. Breaking news is first heard on Twitter before it can make the 5 p.m. television broadcast.

With expanded social media coverage, the students can tweet their work and spread the message of quality content for the world to see.

Henry said, “You can create and control your own media. You become your own journalist and promote yourself better than you ever have before. No matter how you feel about social media, you have to use it to your advantage.”

With social media changing how news is so widespread today it leads to everyone doing more with less. Students who want to pursue a career in print have to know how to do video and vice-versa.

Every student-journalist hopeful has to be their own one-man band when it comes to reporting. In just seven years since Henry graduated the University of Pittsburgh, he has seen this change first hand.

Henry said, “In this ever-changing media market, if you don’t know how to do everything you can become lost. You may not have to do everything well, you just need to have the knowledge of it all.”

The students at SFC will help NEC Front Row get off and running. A good amount of content is already up on the web-site covering the Terriers fall teams. When basketball season rolls around, that’s when SFC’s section of the site will be loaded with content.

Some ideas that have been tossed around include a student-athlete feature of the week, a top 10 highlight video and some kind of basketball talk show where players and writers alike can come on and discuss what’s going on and off the court.

NEC Front Row will put all graduating seniors a step ahead of the competition. If they are thrown into the fire of the real world at least they will have this training embedded in them.