NEC CHAMPIONSHIP PREVIEW: REIGNING CHAMPS LOOK TO HOLD ON TO THEIR TITLE

Home /Sports/NEC CHAMPIONSHIP PREVIEW: REIGNING CHAMPS LOOK TO HOLD ON TO THEIR TITLE 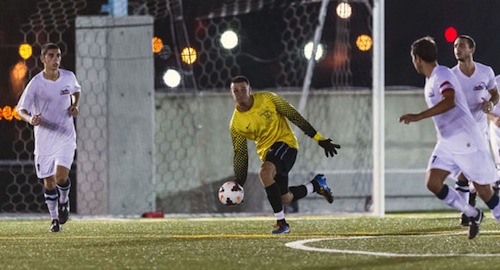 Tomorrow afternoon the St. Francis Terriers men’s soccer team will seek to win the NEC Conference crown for the second consecutive season, as they will face off against the Saint Francis University Red Flash.

Junior goalkeeper Jack Binks and freshman midfielder Vincent Bezecourt helped lead the way for the Terriers in capturing their biggest victory of the season to date.

Binks was a stone wall for the entirety of the game as he recorded nine saves en route to collecting his 10th shutout of the season, and arguably his finest performance yet.

Bezecourt drilled in two goals in the second half to help propel the Terriers to victory, giving them a chance at repeating as NEC tournament champions.

The Terriers have previously repeated as NEC champions in 1995 and 1996, the only time they have done so in school history.

The number three seeded Terriers have caught fire as of late going (4-0-1) in their last five contests, and haven’t lost a game since October 17, 2014, nearly one month ago to the day.

Coincidentally the Terriers did suffer their last defeat at the hands of none other than the Red Flash, which was a 1-0 victory for the current number one seed in the NEC.

As hot as the Terriers have appeared to be, the Red Flash have been every bit as hotter as they have won all of their last six games heading into Sunday’s championship. The Red Flash has notably outscored their opponents 13-3 in that six game span.

The impressive showing over the course of the last month includes last night’s 1-0 victory over LIU Brooklyn in the NEC semi-finals.

The Red Flash were in attack mode all game long and finished the night with 12 shots on goal. The lone goal came from freshman defender Pedro Neto.

The game’s two top goal scorers will have garner lots of attention from their respective opponents as both of them have put together solid 2014 campaigns to this point.

Terriers junior forward John Makaya has a team leading eight goals and was accounted for by the opposing Bryant Bulldogs in the NEC semi-final all game long, which helped to open things up for his teammates.

Makaya made only one goal in the last seven games in which the Terriers have played and may be due for a big showing in the NEC championship matchup.

Senior forward Ryan Byers is leading the Red Flash heading into the championship having put seven goals on the board for his team this year.

Byers is rolling into this title game having scored five of his goals in the Red Flash’s last five games.

Sophomore defender Francis de Vries has a Red Flash second leading five goals on the season thus far and scored the only goal in the previous matchup against the Terriers, which as mentioned before remains as the Terriers latest loss to date.

Byers and de Vries will try to provide matchup problems for the Terriers stout back line which is led by co-captains and senior defenders Andy Cormack, and Riccardo Milano.

The Terriers go into Sunday’s championship with a (10-5-4) overall record on the season which includes them finishing (4-1-2) in NEC play.

The Red Flash head into the championship game with a league best (6-1) record in NEC play and a (13-5-1) overall record, which is also a league best.

The 2014 NEC men’s soccer Championship contest will take place at 1 pm on Sunday, November 16, 2014 and will be available via: http://necfrontrow.com/