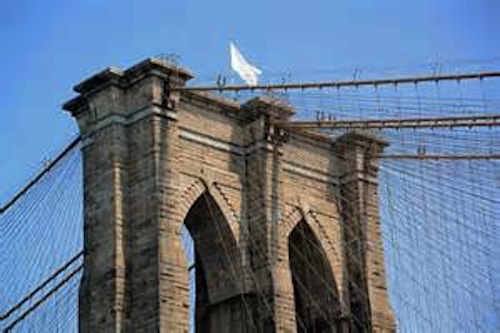 The white flags were first spotted by construction workers around 5:30 a.m. and since have been removed by NYPD.

Video taken at 3:10 a.m. early yesterday shows four or more people walking on the bridge’s pedestrian path, and around 3:30 a.m. the light illuminating the flags on the Brooklyn tower went out.

NYPD states that large aluminum pans were secured to the lights with zip ties in ordered to conceal the lighting of the flags.

The police also claim that the bleaching of the flags does not appear to be connected to a nefarious plot or political message, even though a white flag symbolizes the act of surrender.

“At this point it appears that it has no particular nexus to terrorism or even politics. This may be somebody’s art project, or maybe an attempt at making some kind of statement, but at this point it is not clear what that statement is.” said deputy commissioner for intelligence and counterterrorism, John Miller.

Miller also believes that the offenders may have experience in climbing, construction or bridge work, or even possibly have been on the towers of the bridge prior to learn the dimensions.

“There’s some indication of some good deal of pre-operational planning,” Miller added.

There is still an investigation of how the perpetrators climbed the towers without being caught.

Police Commissioner Bill Bratton comments, “Needless to say, no matter what the motive was, that is a matter of concern. I’m not particularly happy about the event.”

“If flying a white flag atop the Brooklyn Bridge is someone’s idea of a joke, I’m not laughing.” Adams stated. “The public safety of our city is of paramount importance, particularly our landmarks and bridges that are already known to be high-risk targets.”

So far the incident continues to raise security questions at landmark city sites.

HOPE FOR THE POPE!
ROBIN WILLIAMS COMMITS SUICIDE AT 63