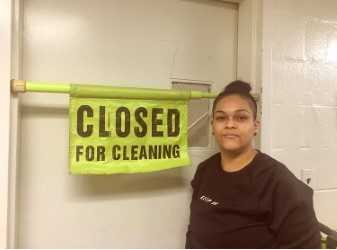 Melissa Machado has worked at St. Francis College since November 2015 as a member of the housekeeping staff.

She is also a song writer that never stopped pursuing her dream.

She trained her ears to music at a very young age.

Everything else came naturally for her.

She attended the Monroe Academy for Visual Arts & Design in the Bronx and that is where here double life began.

There, she used to download the instrumental of the songs she liked and sing her own words on top of them, usually rapping.

She lived a split life throughout all high school: “I would stay up to like 6 in the morning recording songs on the computer. I had like a compact computer, the big fat ones. I would stay up every night, and even if I had school I’d go to school late, like at 10-11 in the morning.”

Melissa formed a little group with her cousins and although they used to sing only for family events and even managed to record a CD.

The two identities of Melissa were art student during the day, and song writer during the night.

And as the time and the years passed she changed the job, but her soul remained the same.

Melissa never wanted to go to college, because in order to make music the only thing she needed was dedication, time, and funds.

That is why she started working at St. Francis three years ago.

“A friend of mine was working for this company called CBS (Collins Building Services) and she told me there was the opportunity to work at St. Francis, so I decided to get it straight away… I called them, I did the interview and I got the job.”

Melissa loves her job so much that she never called out in more than a year.

She loves the atmosphere on campus and especially the people.

From the students to the faculty members to the coworkers, she is friendly and accommodating with everyone, and feedback from people is the main reason for her happiness on the workplace.

“I get along with everyone” she says,

“I am always happy to be around.

I am very friendly, and a simple conversation like ‘Good morning, how are you?’ can change someone’s day.”

She commutes to her 9 to 5 job every day, Monday to Friday, from the Bronx, where she lives on her own.

She dedicates her weekends to her sister and nieces — but her free time belongs to her main passion: music.

Melissa also spoke about how hard living in New York is– the rent, the bills and the duties block her from quitting her job and pursue her dream.

Nonetheless, she manages to travel a lot, and she goes back home to visit her family in Dominican Republic and Texas (where the paternal branch of her family lives) every 3-4 months.

However, she never considered leaving New York permanently, as she states:

“In Texas you need a vehicle even to walk your dog”, and also if there is a place on earth where someday her secret identity will emerge and bump out of track the current one, that place is New York City.