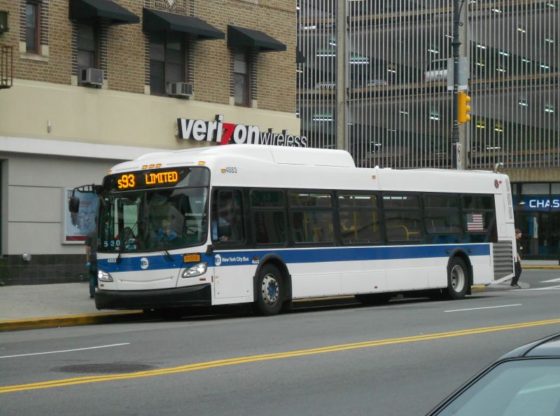 The MTA is about to make it possible for passengers to bring their bicycles across the Verrazano-Narrows Bridge for the first time.

Bike racks will make their debut tomorrow on the front of select S53 and S93 buses, which travel between Staten Island and Bay Ridge, Brooklyn.

The routes were chosen for the yearlong Bike & Ride Pilot Program because of their close proximity to current and planned bike paths as well as the College of Staten Island where biking is a common form of commuting.

“Now customers can take advantage of the city’s bike lanes and greenways without worrying about how to transport their bicycles,” MTA Bus President Darryl C. Irick said in a statement.

38 racks have been purchased by NYC Transit for $42,000. Three types of racks will be tested during the trial.

The racks – which only hold two bikes – will be free to use on a first come, first served basis.

They come with instructions and riders must be able to secure and remove their own bikes.

A test run was conducted in March with no major issues, though there is some concern over tight turns along routes as well as the effect bike racks will have on overall maintenance costs, the MTA said.

“This is an exciting first step in bringing New York in line with many other cities when it comes to putting bike racks on buses,” NYC DOT Commissioner Polly Trottenberg said in a statement.

However, not everyone likes the idea.

“I think it’s a dangerous idea,” a Staten Island resident said in an interview with NY1. “I think it’s a foolish idea and it’s only going to encourage people to slow things down more than they already are.”

Upon completion of the trial, the MTA will review its effects on service and make a decision regarding its possible expansion.