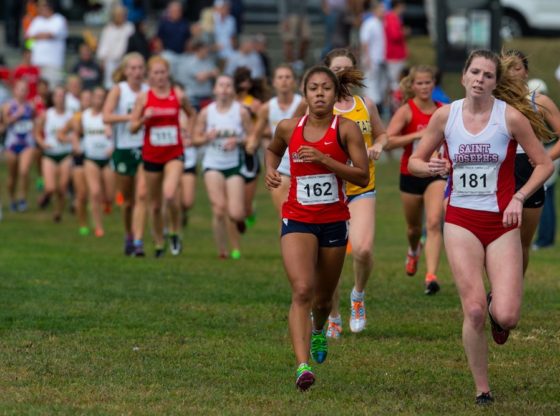 Stephanie Morales, a SFBK junior, is taking the 2013/2014 cross-country season by storm.

This Brooklyn native began running track at the age of nine years old, but it wasn’t until she attended high school that she started running competitively.

Morales’ first year at SFBK started off with an injury and as a result, she was forced to red shirt for cross country. She was able to run during the indoor track season, but was still adjusting to her injury. This caused her to sit out during the outdoor track season, due to shin splints.

“The hardest part about running track is trying to stay healthy, knowing you have a really risky injury,” she explained.

Her second year at SFBK, she was able to run and was still trying to adjust to life as a Division 1 athlete.

“Last year, being the newcomer to the team, I was not even considered in the top 5. I was the last girl crossing the finish line,” said Morales.

That only pushed her to work harder. She has a strong support team behind her, who help keep her motivated.

The first person on her mind is her godmother. “She’s the one that actually got me into running track. If it wasn’t for her, I wouldn’t be running right now,” she said.

Her grandmother, who passed away this past January of cancer, is also always in her thoughts as a source of motivation when she runs.

“And now I run for our new coach, coach Busch. He’s definitely a motivational inspiration because he knew I wasn’t a distance runner,” Morales said.

“He’s definitely huge motivation for me because he believed that I could be a distance runner and so far he’s been proven right.”

Morales also found motivation from within.

After the 2013 outdoor track season, Morales decided to try out the Insanity workout, a 60-day intensive program, until XC began in June.

During this time, she also participated in weight training, three times a week.

Once cross-country began, she added running six days a week to her workout routine.

Until Insanity was over, she was working out 2-3 times a day, determined to improve her cross-country performance during the upcoming season.

During this cross-country season, Morales was consistently knocking two to three minutes off of her personal bests. She was also the second girl from SFBK to pass the finish line in most races.

Now that cross-country is coming to an end and the track season is starting up, Morales is focusing on her indoor events.

Stephanie MoralesMorales participates in the 400 meter, 800 meter and sometimes the 1000 meter races.

Her focus is the 800 m, but after a successful cross-country season, she is thinking about running the 1500 m, and has high goals set for herself.

“Being part of a Division 1 school, you have to try your hardest and exceed your potential. Even though I’m not a cross country runner or experienced Division 1 runner, I want to prove people wrong.”

Morales came into the 2013/2014 academic year determined to show people that they shouldn’t underestimate her and so far, she’s doing just that.