MOCKFORD MAKES IT RAIN IN WIN OVER LIU BROOKLYN

Home /Sports/MOCKFORD MAKES IT RAIN IN WIN OVER LIU BROOKLYN 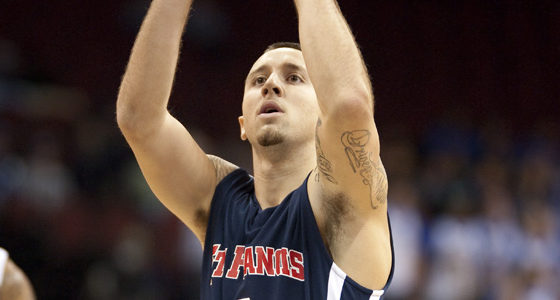 Basketball: Ben Mockford leads the Terriers to a 78-64 victory over LIU Brooklyn.

Final: The Terriers come up with a huge conference win this evening as they knock off bitter rivals the LIU Brooklyn Blackbirds 78-64.

Ben Mockford was the star this evening as he put up a career high 30 points shooting 11-18 from the field and 8-14 from three. Tonight was his night, even though he got off to a slow start he was able to shake it off with a monster performance.

Cannon had another fantastic game as he scored 19 points and grabbed a game high 14 rebounds. Cannon has been the man for the Terriers all season long and tonight was just another very solid game for him.

Brent Jones stepped up big time tonight, the Terriers were in need of other sources of offense and they got that tonight from Jones. He filled up the stat book tonight scoring 8 points, dishing out 12 assists and pulling down 7 rebounds.

“He’s becoming a leader, he’s tough you know? He does a lot of things that don’t show up in the stat sheet, he’s coming of age, he’s figured it out.” Coach Glenn Braica on Brent Jones’s play this evening.

Anthony White and Sheldon Hagigal both had very nice games of their own as they both added 7 points apiece.

The key to victory tonight came down to the Terriers dominanting the battle on the boards. They out rebounded the Blackbirds 52-28 and grabbed a whooping 26 offensive rebounds.

The Terriers now improve to 8-0 on the season when they out rebound their opponent and tonight they put on a clinic in doing so.

From the opening tip the Terriers played their brand of basketball and never looked back. We saw a very gritty performance were the Terriers fought for every lose ball. “I like this group they’re resilient” Coach Braica commenting on the play of his team tonight.

The Terriers finally found their niche on offense after a number of poor offensive performances in which they struggled to find any rhythm at all.

With Mockford being able to knock down the three point ball, that opens up the inside game for Jalen Cannon who was a man amongst boys tonight. No one on the LIU side was able to put a body on him as he grabbed 14 boards, including a huge put back dunk in the first half.

Blackbirds Senior guard Jason Brickman was held in check this evening as he only scored 6 points and dished out 10 assists. The Terriers were able to control the Blackbirds floor general as, Brickman and company were never able to get going in this one.

The Blackbirds did have some bright spots in this defeat, Junior forward Landon Atterberry scored a team high 19 points and Junior guard Gerrell Martin added 18 points.

This is a huge win for the Terriers as it marks the first win against LIU Brooklyn since 2010. We are starting to see a changing of the guard in the NEC. The Blackbirds have been a force in the NEC as they won the conference the past three seasons.

The Terriers need to build off this impressive win. They currently are sitting in first place in the NEC but continue to improve as the season moves forward.

The Terriers are back in action on Saturday January 11th, as they take on Mount St. Mary’s on the road at 2pm.

Halftime: The Terriers came out tonight playing their brand of basketball as they are up by 10 at the end of the first half.

After a tough 20 point defeat at the hands of Columbia, we have seen an inspired Terriers squad this evening. They have come out playing very gritty and are doing all the little things that need to be done in order to win.

The Terriers have looked a lot better on the offensive side of the ball this evening. Junior forward Jalen Cannon has led the way thus far for the Terriers. Cannon has 17 points and has grabbed 9 rebounds, 7 of which were offensive rebounds.

Senior guard Ben Mockford had gotten off to a shaky start going 0-4 from the field, but he has found the groove scoring 12 points, shooting 5-12 from the field.

The difference after one half of play has been the Terriers controlling the battle on the boards. They have out rebounded the Blackbirds 33-14. They also have been able to capitalize on their second chance opportunities as they have pulled down a total of 20 offensive rebounds.

The Terriers have set the tone early in this one, as their defense has led to offense. In order to come out with a win tonight they need to come out with the same energy in the second half.

They must continue to control the play of Senior guard Jason Brickman. He currently has 4 points and 8 assists, but he is capable of breaking down any defense. If they continue to shut him down, that will speak volumes towards the outcome of this matchup.

Some other top performers for the Blackbirds in the first half were Sophomore forward E.J. Reed, Junior guard Gerrell Martin and Junior forward Landon Atterberry who all scored 8 points a piece.

The Terriers have gotten a nice contribution from Sophomore guard Anthony White who has scored 7 points.

It will be an interesting second half of play, as the Terriers look to add to their 10 point lead and improve to 10-6 on the season with a big win this evening.